POTATOES FOR THE GARDEN
It is hard to think of any other vegetable that has had a major impact on the British way of life than the humble potato. It is eaten by most people daily as boiled, mashed, baked, as a salad or as chips.
It is a great source of food health and its cultivation gives us immense exercise.
It is a major farm crop in Scotland for both ware and seed potato production. It was even responsible for providing us with extra holidays during the tattie fortnight when school kids were granted time off from studies to help the farmers bring in the harvest. Although they are now all harvested by machines, the holiday period is still enjoyed by most people.
Howking tatties is still remembered by an older generation as a chance to escape from the housing estate to the fresh air of the country and earn a wee bit extra money. The autumn was usually cold but sunny, and it was never too wet. The work was very hard and that digger always seemed to appear just as you finished picking your bit and before you got a chance for a breather. The bonus was the beauty of the farming countryside and that bag of spuds that went unnoticed as it followed you home.

It was a way of life for many years, but nowadays it is all done by machinery and none disappears off site under the arms of a tired but happy picker.
History
Potatoes were grown in South America in Peru 8000 years ago, but it was not till the middle of the 16th century that explorers discovered them and brought them back to Europe. At first they arrived in Spain then years later to Britain and Ireland though at this time there potential was not realized. The potato, Solanum tuberosum was still only of interest to botanists and herbalists.
Major changes to land use, industrialization and expansion of towns brought in a need for something easy to grow to feed the population. Potatoes were easy to grow, store, cook and transport. The Irish peasants took up their culture in the 17th century followed by England in the 18th century, appearing in fields, gardens and allotments. Scotland was slow to accept them at first as devout Scottish Presbyterians refused to eat them as they were not mentioned in the bible. Around the world they were thought off as unclean, linked to witches and the French thought they caused leprosy.
Soon populations in both Scotland and Ireland desperately depended on the potato for their sustenance, but then disaster struck when the climate changed to a wetter regime in 1845 and 1846. Potato blight thrived in the wet weather ruining the crops and leading to severe famine. The population had no choice other than to leave or face death by starvation.
Today plant breeders are still working on developing new strains of potatoes that have resistance to potato blight caused by the fungus, Phytophthora infestans. It can still seriously affect late and maincrop potatoes but earlies are often harvested before the disease can get a hold.
Potatoes are now a major food crop all over the world from Britain to USA, India and especially China.

Culture
To grow good crops of potatoes consistently every year it is necessary to be aware of the range of pests and diseases that can seriously affect yields and do everything possible to minimize the risk.
Start off by purchasing seed tubers only from Scottish or Irish sources where very strict hygiene conditions ensure the crop is clean and gets the highest certification. This information will be shown on labels on all bags purchased.
Farmers work under surveillance with plant inspectors so the crops are well rotated and always on land tested to be clean if the crop is for certified seed production. Gardeners and allotment holders should practice a four year rotation and make sure any ground keepers are removed immediately they appear. If you are tempted to retain seed potatoes from your own healthy crop, only do so for one year and only if the crop was very clean and free from blight and any other pest or disease. Never accept seed potatoes from a friend as the risks of potential infections are too great.
Potatoes are heavy feeders so grow best on land that has been well manured in autumn and left rough over winter.
It is a good practice to chit early varieties as it gives them a head start. Place the seed potatoes upright, (rose end upwards) in trays or egg boxes and leave in a light frost free position for a few weeks to get them to sprout. Some tubers may produce numerous sprouts. The smaller ones can be removed to leave two or three. This reduces the crop slightly but gives bigger potatoes.
Planting
Planting time is very much depending on weather, so in a mild period it could be the end of February, otherwise as soon as you feel there is some warmth in the ground in March.
Earlies are spaced about 12 inches apart along the rows which are 18 inches apart. For maincrops increase the spacing to 15 inches apart with rows 2 to 2.5 feet apart.
Take out a furrow six inches deep and run some well rotted compost along the bottom. Cover this with some soil and plant into this. Cover the rows but leave a slight ridge to mark the line.
Potato fertilizer high in phosphates and potassium, may be added during the covering of the tubers, but don’t allow direct contact with the tuber.
Growing on
Once the foliage emerges keep an eye on the weather and if frost threatens earth over to protect them. Continue to earth over as this kills weeds and creates a friable structure that potatoes love to grow in.
Hopefully earlies will escape blight, but watch out for blight on maincrops if wet weather predominates. You can protect the foliage with spays of Bordeaux mixture, but if rain keeps washing it off it may be better (if the crop is sufficiently advanced) to cut off and remove the foliage, but leave the crop a few more weeks to mature. 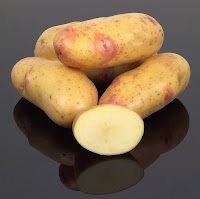 Lifting
Lifting can begin at the end of June with first earlies and continue till October for lates. Lift on a sunny day and leave the spuds to dry on the surface for an hour or so. Discard any tubers that show any greening as this contains poisons. Potatoes are best stored in the dark in hessian or paper bags in a frost free shed protected from mice. They can also be stored in the ground bedded on and covered with straw, then protected with a layer of soil.
New Spuds for Christmas
This is becoming a very popular activity to achieve fresh new potatoes for the Christmas table. Order some late stored tubers of an early variety ready for planting in June or July. Give them the best growing conditions, or in barrels, containers or growbags as they do not have a long season left to grow. Keep them watered and fed then as soon as autumn comes and the foliage dies off remove it and just leave them where they are. Do not give any more water and they will store perfectly where they are until Christmas, provided we don’t get any more early severe frosts.
Varieties
There are very many varieties to choose from in every category from first early to late and new ones appear every year. Personal likes also decide whether you like a dry, waxy or floury texture. Some have a strong flavour whereas others can be very bland. It is impossible for anyone to recommend the best range as they are all very different and personal. Read the catalogues, talk to other growers, then make your choice. Try out a new variety every year.
Research
Research at the Scottish Crops Research Institute and many other places is looking at increasing  vitamin C content and improving disease resistance, especially late blight, but also a host of others including blackleg, brown rot, ring rot and wart disease. The main pests under the microscope is the potato cyst nematode and free living nematodes. There is concern about disease in European potatoes which are being prohibited entry as seed crops but can be brought in as laboratory grown micro plants.
Glendoick Garden Centre will be holding a Potato Weekend on Saturday 5th and Sunday 6th February with potato grower and expert Alan Romans giving advice. They will be showing some of the Heritage varieties including Bonnie Dundee, Salad Blue and Shetland Black.
End
Posted by John Stoa at 00:11