Rhubarb, The next Superfood

RHUBARB – THE NEXT SUPERFOOD
Rhubarb is finding a new lease of life in the modern world. Its popularity has waxed and waned over the years, but its value for medical purposes is extremely high so it is undergoing scientific research all over the world for a host of uses. It is also valued for its culinary uses in stews, jams, crumbles, compote and chutneys. It is a very healthy food being high in anti-oxidants, calcium and potassium and as scientists are finding out it releases high levels of polyphenols when baked and stewed, and these may have a beneficial effect against some cancers.
These are early days as research is ongoing, but it does seem that our humble rhubarb may well become a very important superfood, and just as important is the fact that it does make a delicious jam, an exotic stew and a crumble to die for.

History
Rhubarb has been in use for thousands of years though mainly as a medicinal drug. The Chinese dried the roots, which are cathartic and astringent, for use as a laxative and other ailments.
Other rhubarb species were found in Mongolia, Tibet and Siberia, but did not possess the same medicinal properties as the Chinese species. The Greeks and Romans imported it from China for   medicinal uses, then in the thirteenth century the explorer Marco Polo brought it back to Britain from China as it was highly valued as a drug.
It was not until the early nineteenth century that it was used for culinary purposes. A south London nurseryman and strawberry grower was looking for ways to use the new imported product sugar. Rhubarb stems were a waste byproduct from the rhubarb drug trade, but he discovered that they could make a delicious sweet tart just as popular as his strawberry tarts. He found a new market and the rhubarb we now know took off.
It was very easy to grow so soon became very popular in every garden as a readily available food
known as the poor mans fruit amongst the working classes.
In 1817 in the Chelsea Physic Gardens some roots were accidentally covered over with soil. Several weeks later they discovered the tender bright red blanched stems that had a superior flavour to the outdoor rhubarb, and so an industry in forcing rhubarb started initially around London. 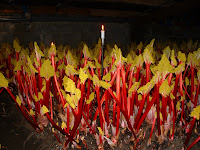 Later a new rhubarb industry emerged in Yorkshire known as the rhubarb triangle from Leeds and Wakefield to Bradford. They had the best clay soils, a woollen industry to supply shoddy, an organic manure, a coal industry to supply cheap heating for the forcing sheds and a road and rail network to get the product to markets quickly. They also claim the superior flavour comes from their Yorkshire water, just as our whisky industry in Scotland relies on our pure highland burns.
During the last war its popularity faded as sugar imports were very restricted, but as countries recovered, it had a brief resurgence until cheap travel allowed the import of fresh new tropical fruit from all over the world. Rhubarb just could not compete.
However we are now turning full circle as food hygienists discover just how healthy rhubarb is. Almost every allotment plot holder now has his patch of rhubarb and demand is very strong as people are now very keen to live a healthy lifestyle.
Research
Rhubarb roots and stems are high in anthraquinones, especially emodin and rhein, with both cathartic and laxative properties, and cooked stems have high levels of polyphenols, an anti cancer chemical. The roots also contain stilbenoid compounds useful in lowering blood sugar levels.
Research with rhubarb properties is covering gastric cancer, leukaemia, improvements to blood clotting, and reducing hypertension during pregnancy.
The high fibre content may help some people with high cholesterol levels. Some extracts appear to have anti-inflammatory and anti-allergy affects.
However the leaves are very toxic as they contain oxalic acid, so must never be eaten, but are perfect on the compost heap.
Ongoing worldwide research is covering a vast area of medical problems.
Cultivation 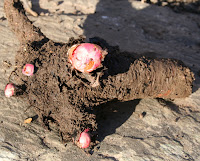 Rhubarb grows best on well drained but moisture retentive clay soils that have been well manured and deeply cultivated. They love moisture, heavy feeding and regular picking to encourage new leaves to continue to form. In mid summer any glut can be cut and stored in the freezer.
Crowns with two or three buds are planted out in winter about three feet apart in well prepared soil.  They are usually planted in odd shady corners but actually grow better in full sun. Do not pick off any leaves in the first year. They will then grow and crop for up to five years before needing dug up, split up and replanted.
Timperley Early is the earliest variety, Stockbridge Arrow and Queen Victoria follow on and then Cawood Delight is a late but with the best deep red stems.
Forcing
It is easy to extend the season by forcing some roots every year. Rhubarb needs a cold dormant period in winter to rest, so dig up mature roots after  three to five years old in mid to late winter and place them somewhere in warm darkness. Keep them moist, but don’t water the stems otherwise they could rot. I use a space adjacent to my new compost heap which is warm, but another excellent spot is under the greenhouse staging with light excluded with black polythene. Sticks are ready for picking in four to six weeks. Always twist and pull them, do not cut them off.
When the crop is finished put the old crowns on the compost heap as they will be spent.
Cooking
Rhubarb crumble, pies and tarts are most peoples favourite and stewed rhubarb with custard is heavenly, but these are well established so need no further mention.
However try rhubarb and fig jam. It is fantastic and so different from the normal traditional jams.
Then extend the recipes with a compote of rhubarb and blackcurrants or rhubarb and strawberries in the ratio of three times rhubarb to one portion of blackcurrants or strawberries. This compote can be used with breakfast muesli, or with desserts in custards, yoghurt or as a sauce with a dessert sponge, cake or tart.
End
Posted by John Stoa at 12:28