ROSES
My first gardening memory from childhood involved roses. It was one of those unforgettable experiences, even for a four year old. My grannie, bless her soul, sent me, complete with bucket and shovel, up Harestane Road running after the grocer’s cart, knowing that at some stage his horse would do what horses have always done whether in a field or in the street. This was an opportunity not to be missed as she had a border of hybrid tea roses that would soon be the envy of her neighbours after this tousled haired laddie struggled back with his steaming bucket.
My first gardening lesson, roses are gross feeders and a perfect rose may involve a lot of hard work but the rewards can be immense.
My horticultural career took me all over Britain and every new house came with a garden that just had to have roses somewhere. A garden for me would not be complete if there were no roses.
Hybrid Teas and floribundas can go in beds and borders, shrub roses can provide shelter and privacy and ramblers and climbers can go on walls and fences. You can even get varieties suitable for ground cover.
My first roses 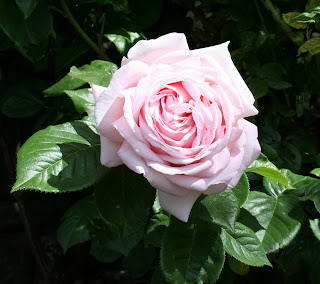 I had always been very ambitious and keen to learn my craft and rose growing was at the top of my list, but they were very expensive to buy on an apprentice’s pay. It was easier for me to join the Royal National Rose Society who then gave you a book on rose growing, varieties and propagation. I ordered 100 Rosa canina briers and decided I would bud my own roses. I only had a broken pen knife to perform my budding, but the book was good and I managed to get 82 roses from my 100 rootstocks.
At college in Essex I did a dissertation on rose rootstocks discovering that Rosa canina was out of favour as it produced suckers too readily and now the favoured rootstock was Rosa laxa. Someone down south was also experimenting with Rosa multiflora rootstock which proved to be superior to all the others, but was not commercial on account of having a small neck which was difficult and slow to bud. However I had all the time in the world so I got hold of these and produced my best roses ever.
It is now difficult for the amateur gardener to get hold of rose rootstocks as they are mostly grown in Holland, so we can propagate our roses from hardwood cuttings.  They are fairly easy to root. I covered this topic two weeks ago, but you can still see it on my blog, the Scottish artist and his garden.blogspot.com where I archive all my articles.
Rose varieties
Specialist rose nurseries in Scotland, England and Ireland have been breeding new roses for years so there is no lack of choice. In the early years there was an emphasis on producing floribundas, then trying to get floribundas with hybrid tea type flowers. There has always been a demand for a good red rose with scent, a strong head and several flowers per stem. E. H. Morse is hard to beat,  but other colours proved to be a bigger challenge. Bicolours became popular such as Piccadilly, then the vermillion colour appeared with Super Star many years ago. There are now excellent varieties to be found in just about every colour.
We are now in a different environment with sulphur free clean air better for humans, but also better for all the main rose diseases. Most of the chemicals previously used to control rose diseases have now been withdrawn. Breeders need to concentrate on strength and disease resistance in rose breeding so we can grow good roses without the need for chemicals.
However we are not there yet as I see many varieties still listed as disease free which I have had to grub out due to debilitating attacks of blackspot. Both shrub L D Braithwaite and climber Golden Showers have had the chop due to die back after a blackspot attack. Margaret Merril is a lovely white scented rose that is great early in the season until mildew gets a hold, then it struggles badly.
Every one will have their favourites, so my choice is purely down to what gives my garden the biggest splash of colour.
E H Morse is my best red, Dearest, a floribunda my best pink, Miriam my best white with a pink blush.
I have grown many shrub types and now use some of them on walls and fences as climbers. Dublin Bay is a brilliant red, but has no scent unlike Gertrude Jekyll, a deep pink with the Old English rose scent. If you need a very vigorous climber, the old variety Mme Alfred Carriere, introduced in 1879, is very reliable and puts on a spectacular show of off white scented flowers all summer.
Rose Planting
Roses thrive in well manured clay loams. It is a good practice to double dig any area to be planted with roses to break up the subsoil, aerate it, improve the drainage and incorporate manure or compost. When digging deep do not bring up any clay to the surface.
Climbers planted against a house wall will need removal of any builder’s debris and replaced with some good top soil. Work carefully as there may be services going into your property. Break up any consolidated hardcore below planting depth as the plant will be very happy to grow through this and still thrive.
Planting bare root plants can be done from November to the end of March, though nowadays it is more usual to purchase container grown plants that can be planted at any time. Make sure all bushes are given a good soak before and at planting to get them off to a good start.
Give the bed a dressing of a general fertilizer as roses are gross feeders and will respond to feeding.
Spacing can be as close as 18 inches for dwarf bushes or six to ten feet or more for climbers and ramblers.
Rose pruning
Hybrid tea and floribunda roses are pruned in the dormant season from late November to mid March, though with global warming this period is getting shorter.
Start by removing weak shoots, dead snags and any shoots growing up the centre. Providing there is several strong young shoots remove some older branches. Finally prune the young shoots to an outward growing bud about six to twelve inches from the ground. 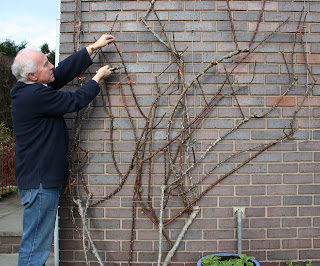 Roses can be relied on to recover from bad pruning. If you prune them very lightly they will just grow into a larger bush but still flower perfectly well. If you prune them too hard you will keep the bushes smaller, but you could kill a weak variety.
Back in the mists of time I had a three month rose pruning session covering the north west of Dundee open spaces. Roses were at the height of their popularity and all local authorities crammed them into every available space. There was no time for any finesse, forget secateurs, this was a hand shear job cutting every bed to two feet from ground level. Although I was armed with my copy of “How to grow roses” from the Royal National Rose Society my knowledge from the book got me no Brownie points, so I had to do as I was told
That summer I went back to check on all my mutilated rose beds. They were all fantastic, full of flower. We should have won Britain in Bloom. I nearly threw away my book.
Roses are very tough, they can take a lot of ill treatment and still come back with glorious colour.
Shrub roses need very little pruning, only enough to prevent them getting too straggly.
Rambling roses flower on long shoots produced the previous year, so after flowering remove the older shoots right back to the base and tie in the new young shoots. These will flower the next year.
Climbing roses flower the same as bush roses, but produce longer shoots. These are used to form a framework of both young and older branches. However keep the plant rejuvenated by removing some of the older shoots every year. Make sure there is always some young wood around the base so the climber can flower from top to bottom. If the shoots are quite long try arching them horizontally to reduce upwards vigour and encourage flowering.
End
Posted by John Stoa at 09:58