Time for a Clean Up

TIDYING UP
The early summer gales only lasted a couple of days, but the effects in the garden will be felt for the rest of the year. So much young soft spring foliage was shredded that the plants have been weakened and will now be more prone to attacks of pests and diseases. Most plants will regrow again quite strongly if the weather warms up a bit. We have had plenty of rain to keep the garden moist, but not a lot of warm sunshine.
This is also the time of year when we do a tidy up of spring bulb flowering drifts, so the summer flowers can start off with fresh weed free soil.
Time for a clean up 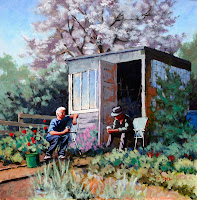 I had just finished cutting back dead wood from numerous shrubs that were killed off after the cold winter when along came the gale and nature had another go at thinning out my garden. More pruning is now needed for my plum tree, peach tree, figs, shrubby loniceras, and climbing roses. The gales broke the main stems from a large lemon yellow flowering broom, Cytisus praecox. It was part of a group of flowering shrubs including many Cistus varieties all enjoying a dry sunny spot, but most died out in the winter, opening up the group and letting the gales smash into the normally very hardy broom. However all of this material will be recycled through our shredder reducing it to wood chips which then get mixed into my compost heap.
The rhubarb suffered a lot of broken leaves in the gales so they will end up as compost.
Daffodils, tulips, crocus and other spring flowering bulbs have had their six weeks of rest after flowering so the old foliage can now be pulled off and added to the compost heap. Hellebores, Doronicums, Aconites, and Bluebells can also be tidied up, but don’t add any bluebell seedheads to the compost heap as they will survive and sprout up all over the place when you spread the compost.
Spring flowering wallflowers, pansies, Forget me not and polyanthus can also be composted.
Add all the kitchen vegetable and fruit waste and all lawn grass cutting to the heap, then turn it a couple of times to help it to breakdown. You do not need to buy special composting worms, as they are already present in the soil, so they will find your heap and multiply very quickly.
Home made garden compost will feed all your garden plants giving them strength to grow and fight off diseases.
Pests and diseases 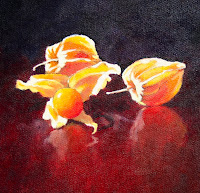 Control of pests and diseases today is not easy as the amateur gardener no longer has access to a wide range of chemicals. We can, however select only those varieties known to be resistant to the main range of diseases, and remain vigilant so we can take action as soon as any pest appears.
Sawfly attacked my gooseberries and had to be hand picked off and disposed off. Similar action was necessary on all my brassicas after a visit by several cabbage white butterflies, and again it was the same story in my shrub border. I found a hundred caterpillars, give or take a few, munching their way through the nice young shoots of Salix britzensis. Control was very messy!!
I had pruned them down to ground level to encourage fresh new shoots for my coloured stem border, which were doing very nicely before the caterpillars arrived.
Peach leaf curl continues to affect some leaves on my peach tree despite two sprays of Dithane. I pick off any affected leaves and destroy them. You can be quite ruthless as the tree is very vigorous and will soon put on new growth.
Roses had a few greenfly on them, breeding furiously, before the gales came and shredded their food supply. I don’t see any now, but a plague of blackfly went for my new dwarf cherry tree causing the terminal shoots to curl up and die. These had to be cut off to let new shoots grow in and replace them.
At least this year I have no gooseberry mildew as I only grow resistant varieties such as Invicta.
Finish off the planting 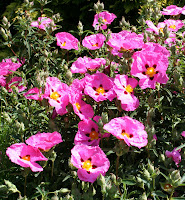 Winter hardy cabbage and autumn cauliflowers are now ready for planting on the allotment, but will need netting to stop the pigeons eating them.
Cape gooseberries raised in the greenhouse have now been planted out in a sheltered spot against a south facing fence. They should do well as this area got a green manure crop of mustard, plus extra garden compost to increase the soil fertility. I just love this exotic fruit, and it is also a favourite of mine for a still life painting.
Courgettes and pumpkins would normally have been ready to plant out by mid June, but the gales shattered them, so it was back to the greenhouse for the survivors to see if I can revive them. When I plant them out it is always on well manured soil with extra compost forked into the planting areas. They really need very fertile soil that can hold moisture. Two courgette plants will give us more than we can ever eat and two pumpkins will give us five to eight large fruits. They store very well in the utility room for use as brilliant soups right through the winter. 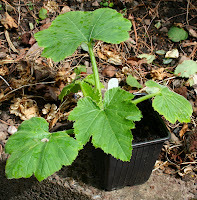 Early harvests
The season has been remarkably early despite the bad winter and spring gales. Early salads are quite prolific, very tender and full of flavour. Lettuce, (now cutting the second sowing), radish, (now picking the third sowing), spring onions and baby beet are all getting harvested regularly.
Strawberry picking started in mid May and is now in full swing. It is strawberries for breakfast, lunch and tea and plenty left over for jam and freezing. Blackcurrants, redcurrants and gooseberries are all turning colour and the two rows of saskatoons are very heavy with young berries swelling up just nicely.
This could be a good summer if there are no more climatic disasters just waiting round the corner.
End
Posted by John Stoa at 23:26