AN EARLY HARVEST
It is very rewarding to pick those few early vegetables right at the beginning of the season. Nothing found in any supermarket can beat a freshly picked young lettuce or radish served on the plate within a few minutes to a couple of hours later. It is surprising that with a wee bit of research and planning you can have some fresh produce from the garden all year round.
Fruit
Although not truly a fruit, rhubarb is regarded as a sweet used in crumbles, tarts, stewed or added to compote. It also makes a fantastic jam when combined with figs and prunes.  Forced rhubarb gives the earliest sticks, but outdoor natural season comes in quickly behind the frozen and those spring bright red stems are just bursting with vitamins and minerals as well as flavour. 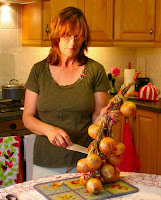 Strawberries are now becoming very popular as an early crop advanced with the help of low polytunnels which are cheap to make, and easy to erect. Use an early variety such as Mae, and follow this with a maincrop such as Elsanta then extend the season using a late e.g. Symphony or Florence. If you wish to have strawberries right up until the frosts come use a perpetual such as Flamenco. Protecting my early strawberries for a very early harvest has paid dividends this year as it has protected them from the continual wet weather. Modern strawberries have been bred to withstand the fungus botrytis which used to devastate crops without at least three chemical sprays of Elvaron (now withdrawn). However even these resistant varieties are struggling very badly trying to cope with constant rain showers, and botrytis is back but not as severe as in the past.
Vegetables
Radish, lettuce and spring onions have been used for a few weeks now. I thin my lettuce to about 4 to 6 inches apart, then do a final thinning over a few weeks using alternate young very tender lettuce plants for salads.

Radish and spring onion are usually sown as a quick intercrop between other slower growing crops such as sweet corn, parsnips and courgettes which are spaced wide apart but take a few weeks to cover the ground. As long as the ground has been well manured these salads will grow quickly.
Early carrots grown under fleece have come along very quickly and although the fleece did get a few holes in it over the weeks, it has given protection from the carrot fly. These small carrots are very tasty and tender.
Baby beetroot are now ready to harvest as the thinning from normal rows allowing the rest more space to grow.
Spring cabbage April is now just about finished, but these have been terrific, despite slugs, caterpillars and pigeons. The earliest cabbage were so tender they only needed two minutes boiling and were plate perfect. I will definitely grow this variety again with a sowing at the end of July.
Stored and frozen crops
The last twelve onion Hytech will be used this month. I did not expect them to store so well in my garage over such a long period and still remain so sweet.
French and broad beans are still available from the freezer as well as a few raspberries, blackcurrants and saskatoons. However with this year’s crop only a few weeks away, some of these will have to go to make room in the freezer.
Another batch of wine is being planned, as nothing gets wasted.
Cut Flowers
The first sweet peas are now flowering but the cool wet weather has held them back from other years, though growth is still quite strong. Always remove old flowers and do not let them go to seed.
Roses make a great display for the table, but it is hard to sacrifice the garden display. However we can always spare a single scented rose. Ernest Henry Morse is one of my favourites.
Garden pinks and border carnations are another excellent cut flower available in early summer and the clove scented varieties are hard to beat. 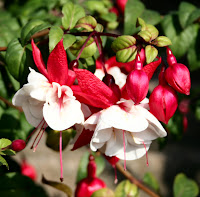 Plant of the week
Fuchsia Swingtime is my favourite hanging basket fuchsia now in full flower though still has plenty of growth to make. Purchased as plugs in early spring and grown on in a pot before planting alone in a hanging basket. I give it a feed once a fortnight to keep it growing. At the end of the season it will get dried off and stored in a cold but frost free place till next spring.
There are numerous different varieties to choose from for pots, tubs, baskets or outdoors in a border, and coming cheaply from plugs it is always worthwhile trying a few different ones each year.
END
Posted by John Stoa at 18:01