SHRUB ROSES
I had always been a lover of roses, but it was only when I gardened on a larger scale that could I indulge in trying out the larger growing shrub roses. The individual flowers may not have the perfect hybrid tea shape, but the sheer floral impact and scent from a mature bush in full flower at its best can be quite breathtaking. Flowers vary from single, double and full petalled and you soon get attracted to the old fashioned flower shapes. 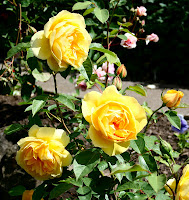 Shrub roses have developed from many rose species and new varieties created by breeding with other bush roses. They can grow from three to six feet or more depending on variety, soil and local climate. When given plenty of room to grow they can put on a fantastic display of flowers. Some only give one show each year, such as Rosa rugosa Fru Dagmar Hastrup but others such as Benjamin Britten and Brother Cadfael are repeat flowering from early summer till autumn and many are highly scented. Rose breeders from all over the world have been selecting and crossing every type they can get their hands on. Sometimes they go for a colour, or size, or disease resistance and nowadays there is a demand for a return to scented roses. Numerous new roses appear every year, so it is worth trying some of them out. However nurseries offer some wonderful descriptions which may be as they find them in warmer drier locations, but in Scotland we are cooler and often not as dry so our roses are more prone to blackspot disease. I have already tried and discarded eight bushes that failed to survive diseases, or the flowers were not up to an acceptable standard.
Types of shrub roses
The oldest roses were species from Europe such as the Gallicas (Rosa mundi is very popular even though it is from the 12th century) grown hundreds of years ago by the Greeks and Romans.
The Crusaders brought back the Damask roses (Ispahan is highly scented) from the Middle East. 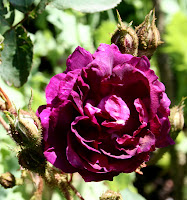 The Albas (Maidens Blush) appeared in the Middle Ages, and the Centifolias (Fantin-Latour) grown in Holland. In Victorian times, the Mosses were very popular. William Lobb is a tall moss with deep crimson highly scented flowers, and the buds are covered in balsam scented mossy glands. These types all have one summer flush but there is also a range of repeat flowering old roses, which have a main display, then continue to flower till the autumn. These include the Chinas, (Old Blush China), the Portlands, (Jacques Cartier), the Bourbons, (Mme Isaac Pereire), and the Hybrid Perpetuals, (Baroness Rothschild).
Zephirine Drouhin is a popular thornless pink Bourbon used as a highly scented wall climber.
Plant hunters have collected many rose species from all around the world. These are very popular with landscape architects for urban landscape plantings (Rosa glauca, R. pimpinellifolia, the Scottish Rose, and R. moyessii well known for its huge colourful red hips) My own favourite is Rosa xanthina Canary Bird which has masses of large single yellow flowers in early summer.
Plant Breeders have had ample stock to use to create further shrub roses including the Hybrid Musks (Felicia and Lavender Lassie) and a wide range of modern shrub roses, bred from Rosa rugosa (Fru Dagmar Hastrup)
Planting and aftercare 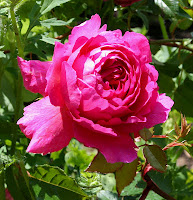 As these are usually fairly large, give them plenty of space. They are excellent at the back of borders and some make excellent flowering hedges.
Roses are gross feeders so enjoy good soil with plenty of compost added, with an annual mulch to feed the surface roots, keep down weeds and retain moisture. They do not need much pruning other than removing any straggly shoots, diseased wood and an occasional old shoot to keep a balance of young and mature shoots.
Watch out for blackspot disease and spray with a rose fungicide, but if it does not cure it, remove the bush and try a different one. Always remove and destroy all diseased foliage.
Plant of the week 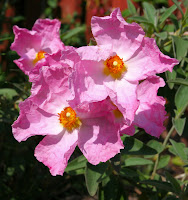 Cistus Silver Pink is a variety of the Rock Rose or Sun Rose flowering in June to July. Cistus thrive in a sunny location on poor stony soils where good drainage is very important. They do not like feeding, mulching or adding organic matter to planting holes. Cistus come with white, purple, pink and spotted flowers which are set off against their grey foliage. The variety Cistus purpureus is also excellent. 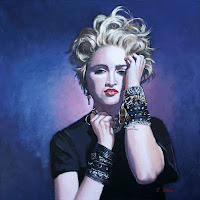 Painting of the month
Madonna is an acrylic on canvas painted for the Madonna art exhibition showing at Art et Facts gallery in Roseburn Terrace in Edinburgh from 16th to 28th July to coincide with her tour and concert in Edinburgh.
END
Posted by John Stoa at 23:43