SUMMER JOBS IN BETWEEN THE SHOWERS

SUMMER JOBS IN BETWEEN THE SHOWERS
It looks like we are going to get a third wet summer, so I watch the weather forecasts and take every opportunity to get into the garden on every sunny day. Growing good garden plants has always been a challenge, but this weather does not make it any easier. On the plus side the garden hose is getting a good rest. It seems we rush out on a dry day to sow and plant, then sit back as they get watered in the following day. However some plants are doing just fine. Climbing roses have plenty flowers on them and not too much mildew. Greenfly begin to build up then a heavy shower comes along and washes a few away, but if I can get a couple of dry days I will give the remainder a rose spray to tackle greenfly, mildew, rust, and blackspot. I no longer grow those varieties susceptible to blackspot so it is not a major problem in these wet summers. 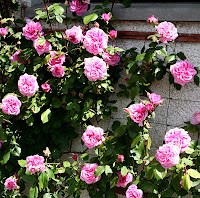 Flag iris, oriental poppies, Iceland poppies, Californian poppies, honeysuckle and peony roses have all been a mass of flowers despite the rain. The Californian poppies have naturalised themselves in the front of a border holding masses of crocus bulbs, but as they have different growing and flowering times they are perfect partners.
Delphiniums are putting on good growth and showing a lot of promise for a good display, but they need strong canes and tying in as they can reach five to six feet tall. 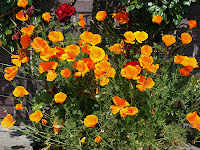 Bedding geraniums and petunias need sunshine so they are beginning to lose their flowers while they wait on summer returning. Busy Lizzies don’t mind rain, but they do not like cold weather which makes them look really sick.
Weeding continues on any sunny days to keep on top, but they seem less of a problem this year.
Seed sowing
Wallflower seeds have now been sown in an outdoor seedbed. After germination and they grow to about four to six inches tall they will get transplanted into rows a foot apart spacing the seedlings about four inches apart. They should make sturdy plants for planting out in late autumn.
Forget me nots (Myosotis) can also be sown this way but in past years slugs have devoured them as soon as they germinate and slug pellets are so weak that they are just not effective enough, so I have sown mine in compost in trays. They will go into plug trays after germination, and then a few weeks later they will be lined out outside to bush up.
I have sown a batch of broad beans in cellular trays to catch a late crop. They will replace my spring cabbage when that crop is finished in July.
Fruit trees
Primary infections (mildew infected young shoots) on my apple tree have been removed to prevent the disease spreading. It looks like a very poor year for Bramley apples. There was plenty of flowers, but very poor pollination or fertilisation, as much of the young crop has fallen off.
Plums are also having a rest this year as there is no more than a dozen fruit on a large mature tree which should have a couple of hundred young plums.
Oddly enough the outdoor Peach Peregrine (hand pollinated with a sable brush) has an excellent crop of young peaches, but the tree is so badly infected by peach leaf curl that there is just not enough foliage to support a decent crop. The tree was sprayed twice in late winter/early spring and once at leaf fall. I blame a combination of wet weather and poor chemical control. Chemicals available in garden centres are now formulated so weak that they are no longer very effective. 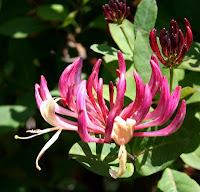 I just hope that if we get some warm days I might get a surge of growth and save the crop.
Greenhouse
Tomato Gardeners Delight is growing strongly and now flowering on its fourth truss, but Alicante fared rather poorly in the cold dull weather. It is alive and growing but nothing to be proud off.
My favourite Sweet Million cherry tomato could not handle this climate. Root rots set in and killed off my plants. They have now been replaced with fresh plants.
Feeding is done on every second watering.
Grape vine pruning continues on a twice weekly basis cutting all shoots to one leaf to prevent them taking over the glasshouse.
An Amaryllus potted up last autumn should have flowered just after Christmas, but all I got was a wealth of green leaves. I gave up after Easter and it got relegated to a quiet corner in the greenhouse where I could ignore it. It has now decided to flower. All very nice, but this is just not its time.
I reckon Anna felt sorry for it and every time she went on tomato feeding duties she gave it a wee drink.
Plant of the week 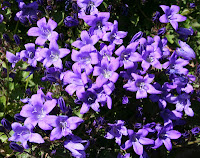 Serbian Bellflower known botanically as Campanula poscharskyana is a great rock garden plant displaying a carpet of lavender blue flowers in June. It is very easy to grow as long as you plant it in a moist but well drained soil and although it will grow in a shady spot it flowers more profusely in full sun. Propagate by dividing up bits around the edges of the clump in late autumn.
END
Posted by John Stoa at 13:53