The sun has returned for a few days and the rain has stopped, so it is time to get onto the land and see what jobs are still to be done before winter sets in. Although there is a frost covering, it is not too deep and will allow me to wheelbarrow compost over the ground so I can continue with digging while the soil surface is not too sticky. A clover green manure crop has grown very poorly, but weather has been very cool and wet, so there is not much growth to dig in at present. 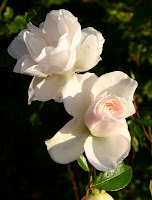 Winter jasmine is really looking good just now as the few dry sunny days has brought out the bright yellow flowers, and Fuchsia Mrs Popple also continues to flower profusely. However it was my white floribunda rose Iceberg that really dazzled me as it decided to continue to flower in spite of recent frosty mornings. I needed to capture it with my camera. Other roses are also giving a bit of colour, but this is their last chance as colder weather is forecast and I like to get ahead with the pruning.

Pruning
Raspberries, brambles, black and redcurrants, saskatoons and gooseberries are all due for a trim, as well as my roses, then later on it will be my top fruit trees, apples, pears, plums and peaches. Under glass the grape vines are now dormant and old leaves fallen off and cleaned up. As soon as the vine stems ripen up they will be pruned before the end of January. However some shoots will be used for a batch of vine eye cuttings to grow into nice young plants.

Summer fruiting rasps have the old fruiting canes removed and new canes tied in to a wire support. If there are a lot of new canes, remove the weakest and leave enough so that they are spaced about four inches apart along the top wire after tying in with a running knot.
Autumn rasps have all the canes cut back to ground level. I give them a light mulch and fertiliser dressing in spring, and new canes soon grow up very strongly which will give the next crop in autumn 2013. I support these with three foot wide weldmesh netting raised about four feet high so the canes grow through it to stop them blowing over in high winds.
Blackcurrants were pruned after fruiting, removing old wood and thinning out overcrowded centres, but leaving any strong new shoots.
Red and white currants are spur pruned to a few buds on a framework of about nine main stems all growing from the centre. Replace one or two of these main stems every year to keep the bush young.
Gooseberries have all shoots removed that are growing too close to the ground as soil splashing on  fruits as they are ripening really spoils them. Also thin out the centres to allow good air circulation and easier picking on these very thorny plants.
Saskatoons only need pruning to keep the height down to about five feet for ease of picking under the protective nets. Remove one or two branches right down to ground level so they can throw up new shoots and keep the bushes young.
I will cover pruning grape vines, top fruit and roses early next year.

Remove finished crops
Cape gooseberries were not successful this year as they need a decent summer to ripen up the fruit in their protective lanterns. They made excellent growth and gave a lot of lanterns, but no signs of ripe fruit. However these were harvested and I will see if they will ripen indoors in a warm room.
I am not overly impressed with this global warming in Scotland, but I do not give up easily so they are scheduled for another trial next year. Some plants were potted up and grown in the glasshouse after the disastrous tomatoes were thrown out at the end of August. These cape gooseberries fared a wee bit better, but a heavier crop would have been more encouraging. 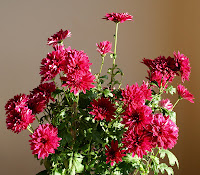 Early flowering Chrysanthemums have now nearly finished, so they have been cut back and the old stools lifted, boxed up and will now overwinter in the glasshouse. These are supposed to flower in August and September in a normal year. My Barca Red new chrysanthemum variety obtained from a flowering shoot given to me at Gardening Scotland at Ingliston in June is in full flower in pots in the house. I propagated it up with leaf bud cuttings which all rooted and grew into young plants though a bit late for this year. This deep purple spray variety looks brilliant, so hopefully next year it will flower a bit earlier.

Christmas cactus known as Zygocactus comes in a range of red, white and pink colours flowering from November to December, then sometimes they will flower a second time in spring. They are a succulent house plant that needs a sunny position on a windowsill when in growth and also when you dry them off to give them a rest and ripen up the shoots so they will produce flower buds. Dry them off after flowering and do not start till you see either growth buds swelling or the second flush of flowers emerging. Never overwater or leave water in the bottom of flower vases.