Christmas decorations come out every year, and brighten up the home, but a few growing pot plants in full flower can still steal the show. Every shop and garden centre will have lots of poinsettias, but there are also many others equally vibrant. Cyclamen, pot mums and Phalaenopsis orchids have been available for a while now, but they are all very reliable. Christmas cactus is still around though mine are always finished a few weeks ahead of Christmas. The winter cherry, Solanum capsicastrum is always a favourite with its orange berries at this time of year, and a pot of scented forced hyacinths will certainly attract attention both for its bright colour as well as its perfume. Amaryllis can be in flower for Christmas, but I do not find it reliable after the first year.
If you are growing your own plants, some of the old favourites can be quite challenging, but very rewarding when they work such as dwarf azaleas and cinerarias, both of which like to be grown in cool conditions. 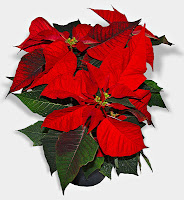 Some plants received as Christmas gifts are designed to have their festive moment of glory then are discarded. Poinsettias, winter cherry and pot mums, (chrysanthemums) fall into this category, as some are naturally tall plants but get dosed with chemical hormones by the growers to keep them dwarf. As we have no access to these chemicals they are best discarded after flowering. However bowls of hyacinths are different. After flowering these can be grown on in a cool light position with some feeding to build up the bulbs for flowering another year, Plant in a border outdoors rather than trying to get another pot plant the following year.

Many festive flowering pot plants can be enjoyed over Christmas then retained to flower another year, though under normal house and garden conditions it is often difficult to time flowering for the next Christmas.

Cyclamen will flower for several weeks up to a couple of months. Keep them growing after flowering in a cool but frost free position. By late spring they will start to go dormant, so slowly dry them off and keep them in a shady place outdoors. Growth will start again in autumn, so resume watering and give them some fresh compost.
Christmas cactus usually starts to flower a few weeks before Christmas and remain in bloom for a couple of weeks. As soon as they have dropped the last flowers dry them off and don’t water until they show signs of growing in late spring. Keep them cool and in partial shade while they rest. Once growth commences restart watering and give the occasional feed, but as soon as they have made a bit of growth dry them off again in late summer. This will ripen up the new growth which will then produce flower buds. Hopefully these will emerge at the end of November to early December when watering can commence again to get them into flower for Christmas.
Azaleas come in a range of colours and the type, Azalea indica is often used to provide a flowering pot plant for Christmas. Although it is not very hardy, always grow it cool and well watered. After flowering keep it in semi shade till late spring, then put it outdoors but keep it watered. It will flower every year, but not always in time for Christmas.
Amaryllis are often bought in autumn then potted up to flower at Christmas. It will need about ten weeks to flower from potting. The flower bud is already formed in the bulb on new bulbs, but to get it to flower in the following years you may need to grow it strongly throughout the spring and summer, but let it go dormant in autumn to ripen up the bulbs. It is often shy to flower until the pots are root bound. Keep it like that for a few years as it hates repotting, which only encourages vigorous growth at the expense of flowers.
Phalaenopsis orchids are popular all year round coming in many colours. They are usually bought in full flower which can last for weeks. They are great value and easy to get back into flower every year. Get them pot bound and don’t be in a hurry to repot, even if the base is several inches well above the top of the pot. Do not cut off the aerial roots which absorb water from the atmosphere, especially if you grow them in a bathroom, which is usually warm and moist. After flowering cut off the old flowered stem and keep the plant watered and fed. A new flower stem will grow again at the end of summer.

Swiss Chard Bright Lights will be the star attraction on the allotment over winter. The stems retain their bright colours no matter what the weather. The plant is sown in spring and leaves with stems are harvested as soon as they are big enough to cook and will last to the following spring when it will run up to seed. This chard is related to beetroot and spinach, so is considered a very healthy vegetable, high in vitamins A, B, C and K and is rich in minerals, fibre, antioxidants  and protein. Young leaves can be added to salads, and mature stems stir fried, boiled, sautéed or added to soup.