At this time of year my thoughts should be relaxing and getting into the festive spirit as the days are very short and outside it is cold and either frosty or wet so gardening activities are very limited. The trouble is I can always find a wee job no matter what the weather, so I still find myself up at the allotment or in the garden or greenhouse.
Now my three art classes have finished till January, I have a bit more time to work on my next painting project of large flowers on big canvases painted bold and loose, but I keep finding these wee gardening jobs to do.

I continue to barrow out my well rotted compost onto the ground for digging in as soon as the surface dries out or we get a light frost. I managed to acquire plenty of organic matter for my compost heap so the ground will benefit from a good feeding. However I won’t compost those areas where root crops are planned for 2013, otherwise I will end up with split roots on Swedes and parsnips. I will also have to hold back some compost for the ground occupied with this years Swedes, cabbages, sprouts, kale and leeks which should last till the end of winter.
Harvesting of these crops continues in all weathers.
My fig Brown Turkey was getting a bit too wide and beginning to block access along the path, so the loppers came out and any shoots growing away from my fan shaped bush were cut back. It is growing against a south facing wall for warmth and protection to assist fruit ripening as there does not seem to be much sign of global warming.
My Goji berry bush also got a haircut as several shoots really took to the skies. It can certainly grow just fine but where are those superfood berries. I need them to keep me in good health for the next twenty years or so. This is its last chance, but thankfully I still have plenty saskatoons and chokeberries to keep me in good form.
The battle with peach leaf curl on my peach tree continues. Shoots growing outwards from the fan shaped bush were removed as well as some old wood and young laterals tied in to the framework. I removed all the old leaves lying on the ground then gave the bush a drench of Bordeaux mixture. It will get another two sprays at the end of the winter. 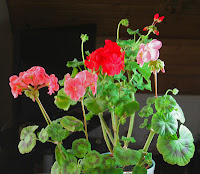 Geranium cuttings taken two months ago are now well rooted so they are getting potted up into small pots for over wintering on windowsills. I potted up a few mature plants which I keep as house plants as they continue to flower all winter in a light warm room.
Zygocactus, the Christmas cactus is now finished flowering and is getting too old so I took six shoots as cuttings and potted them up into one pot. They grow very easy and these will produce a small flowering pot plant for next December.
Fuchsia cuttings also taken two months ago are well rooted and growing slowly, so I will let them keep growing for a few more weeks then slowly withhold water to let them go dormant over winter. Once fairly dry I will keep them in a cool but frost free place.
Grape vines under glass can now be pruned by cutting all growths back to a couple of buds on each main rod. In my six by ten foot greenhouse I grow three grape varieties on five upright rods spaced about 18 inches apart. This framework of single upright rods is permanent and fills one side of the greenhouse allowing tomatoes to be grown on the other side.
Prunings can be used for propagating by cutting them into pieces with a single bud at the top of a few inches of stem and placed in pots in a warm room where they root very easily.
Surplus saskatoons were brewed into a lovely deep red wine 18 months ago, so a demijohn will now be bottled up for the festive season, and my blackcurrant cassis liqueur started last August
will also be ready. Christmas should be good this year as long as I don’t find another gardening job.
Plant of the week 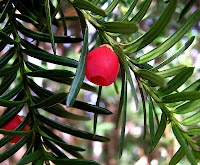 Yew trees have always had a fascinating history, most likely as they can last a very long time, and although they are a very attractive evergreen tree, every part of it is highly toxic. Only the red fleshy aril is not only non toxic, it is also edible. The yew tree at Fortingall is said to be 3000 years old and is the oldest tree in Europe. It was the dominant tree all over Europe in the Middle Ages but met a rapid decline as its wood was perfect for the long bows used in battles and its poisonous sap was used to tip the arrows.

Painting of the month

Mist over the Tay was the perfect setting for a winter landscape painting. I always had this idea, but needed a combination of some decent snow cover, an evening sunset and a bit of hazy mist. I had to move fast to capture the image with my camera a couple of years ago, then an acrylic on canvas painting emerged. It proved very popular as it combined the Tay rail bridge with the Bandstand on Magdalen Green, so I published it as a print.