THE GARDEN COMES TO LIFE


THE GARDEN COMES TO LIFE
I am hoping that although it is blowing a blizzard outside as I write this page, there is a strong possibility that spring will have arrived when it appears in print a week later. In between snow showers as the sun emerges, the snow melts and the garden leaps into life for a brief spell.
This March has been the opposite of March 2012 when it was positively sun bathing weather for most of the month. Now if March weather can completely turn around from last year it could be reasonable to hope that the rest of the year will also be the opposite from last year, i.e. 2013 might just be a very dry year. No comments, please, as these are just my thoughts as I plan how to manage my garden for the coming year, but I think I will get the hosepipes ready just in case.
The snowdrops and crocus are now past their best, but the daffodils are now coming out, the first early tulips are showing colour and my wallflower Golden Monarch has started to bloom. Polyanthus grown from seed sown last year has been flowering from the end of February with a lot of promise for more to come as we get into some warmer weather.
Golden flowering saxifrages are totally unaffected by the cold and snow. They spread slowly but quite thickly and are brilliant at smothering out all weeds. They only grow a few inches tall and seem to love scrambling over rocks, walls and path edges. They are a good companion plant with the blue flowering Chionodoxa as well as Anemone blanda, also blue. 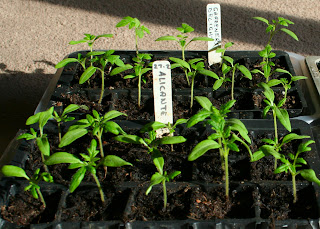 I keep expecting my peach tree to start flowering, as it is usually very early, but not this year, so hopefully when it does flower in April danger of frosts is less likely and pollinating insects will be more abundant. Apple tree flower buds are beginning to swell, with the Oslin coming out first, so the future looks good. No sign of life in pears or plums yet, but saskatoons, blueberries, aronias and blackcurrants are all on the move.
I have purchased and planted three new grape vines outdoors to see what they think of Scotland. They have all been given a south facing fence or shed to keep them warm and sheltered. So my original grape Solaris will get some company with Phoenix, Rondo and Regent. I also wanted to try Siegerrebe but could not find a supplier anywhere, unless I needed a bundle of twenty five vines.

At this time of year the glasshouse is fully occupied with plants in various stages of growth and finding room for everything can be quite a challenge. My glasshouse is unheated, which this year has been tested to the limit. Plants sown in early March in the warmth of a windowsill in a warm room such as onions, broad beans and lobelia soon germinated and want to grow. Normally they go into the glasshouse within a few weeks as they need good light and cooler conditions to keep them sturdy, but frosty nights and day temperatures just above freezing does them no favours. So my sturdy young rooted geranium cuttings got transferred to the cold greenhouse to allow more tender seedlings a few more days of warmth on a windowsill.
Tomato seedlings have now been pricked out into smaller cellular trays to grow on for a couple of weeks before potting up into larger pots. They are on the windowsill with grape vine cuttings, Christmas cactus cuttings and lobelia seedlings soon to be pricked out.
Seed sowing continues with Cape gooseberries, and chilli pepper Jalapeno which I will try this year.
Salads such as lettuce, spring onion, radish and beetroot are due for sowing to give early crops under the protection of low polythene tunnels, but with the season being so cold I am not in a hurry as windowsill space is very limited and the greenhouse is still a bit too cold.
Young buds of tuberous begonias in store are now showing colour, though they have been held back by cold temperatures. The tubers have now been boxed up, watered and I will keep them under a table in a warm room on waterproof trays for a few weeks till they start to grow.

Rhubarb Timperley Early is my plant of the week as it is the earliest rhubarb variety to emerge in spring making a very welcome sight with the promise of fresh sticks to eat. Results from studies on the health benefits of rhubarb are just about elevating it to superfood status as it has so many favourable attributes. It is high in vitamins C, K and B6, high in dietary fibre, and contains the mineral calcium. The bright red colour of the stems comes from its beneficial range of antioxidants. When cooked it releases polyphenols which help in the fight to destroy some cancer cells.
Other natural compounds found in rhubarb help as a laxative, and others help to lower cholesterol. However the leaves are quite poisonous so always cut the stems about an inch below the leaf. Rhubarb likes good soil, so give it plenty manure or compost as a mulch, some fertiliser, and if you get a glut during the summer it freezes brilliantly and can then be used all year round.