DAFFODILS
Although we have waited a long time for spring weather this year and plant growth is running about three weeks late it really lifts your heart when the daffodils start to bloom, as they have been so widely planted all over our city. Council cutbacks might be putting a severe strain on civic planting to keep the town colourful, but this was not always the case, and in past times towns and cities competed with each other for the Britain in Bloom awards. I had the good fortune to be an apprentice gardener at the time when flower power was at the top of civic pride and Dundee had plenty to boast about. Fortunately during those more affluent times daffodils were planted by the million, and as they are perennial they are still here today for our visual enjoyment.
On a smaller scale we can all brighten up our own gardens with daffodils and narcissi by planting a few every autumn as they are not very expensive.
As they flower when other plants are just starting to grow they fit in perfectly amongst deciduous shrubs, herbaceous borders, woodland fringes, clearances and copses. They can also be planted in lawns, but that means you won’t be able to cut the lawns for at least six weeks after flowering, then you will have a lot of cut leaves and grass for the compost heap.
They are also invaluable in allotment gardens to cheer them up and supply cut flower for the home.

When planting in borders or lawns space them unevenly about six to nine inches apart in decent sized drifts. Allow at least four inches of soil above the bulb after planting, though they are often planted a lot shallower and still grow just fine.
Once planted leave them for evermore as they do not need lifting.
The only pest likely to trouble them is the narcissus fly which lays eggs beside the dying foliage. These hatch into maggots which bore into the bulbs eating the centre out of them. The following year you will see plenty of foliage but no flowers. There is no cure, but you can minimise the problem by clearing up the old foliage as soon as it has gone yellow and rake over the soil surface to fill in the spaces where the old leaves were.

Tubs and pots
Daffodils and narcissi are perfect for tubs around the patio and entrances to give an early display of colour. They can also be planted in pots in autumn, kept in the dark and cool for ten to twelve weeks to encourage root growth, then slowly brought into a cold greenhouse where they can green up and come into flower a few weeks early to brighten up the house. However always try to keep them cool otherwise they may get very tall and fall over unless you stake and tie them in.

After flowering dry off all these bulbs then plant them in the garden in autumn.

Types
Daffodils can have large and small trumpets, such as King Alfred, Golden Harvest and Mount Hood. Some are double flowered such as Cheerfulness which is also scented, but the jonquils are even more scented. Some come on a single stem whereas others are multiheaded. Breeders are producing newer varieties all the time, so I like to try a few new ones every year, growing them in pots so I can monitor them at close hand.

Narcissus notes
The daffodil is the national flower of Wales and also the fund raising emblem of many countries cancer research organisations.
The bulbs of all narcissi are toxic containing the alkaloid poison lycorine, so do not confuse them with onions when cooking.
However they do have medicinal values and are grown commercially in Wales for extraction of the drug galantamine used to combat mild forms of Alzheimer’s disease.
Galantamine also helps memory impairments and studies indicate it could help sufferers of insomnia. 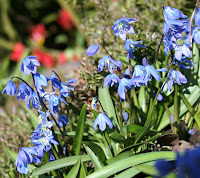 Scilla sibirica is another intense blue flowering plant for spring displays in the rock garden, cottage garden or at the front of taller plant borders. They associate very well with other blue flowers such as Chionodoxa, Puschkinias, Anemone blanda and Pulmonaria and for a colour contrast plant them in drifts alongside red and pink Erica carnea and the yellow Doronicums. This year nearly all of them are flowering together, but this could change in a warm or even a normal spring.
Scilla bulbs are usually planted in the autumn, but multiply from self sown seeds and soon form large bold drifts after a few years.