A VERY WET WINTER
It seems a very bizarre situation when I start to write about what is happening in my world as a gardener but I always begin with a weather report. The performance of the garden seems to be completely at the mercy of the weather, so I am sure that my thoughts will resonate with many readers who will also be finding the same peculiarities in their garden.

By now we are all very aware that winter with snow and frost has just not arrived, but that has not stopped the rain from falling. Television has given us horrendous pictures of those affected by continual rain and floods that never seem to drain away. Up in north east Scotland it has been wet, but, fortunately we have missed the worst of the bad weather. It has stopped all attempts to catch up on winter digging, but we can still harvest our vegetables, get on with pruning, repairing fences and gale damaged greenhouses.
A couple of days of dry weather for us up north allowed us to get all our prunings of the fruit bushes, shrubs and roses shredded up at City Road allotments. I was a wee bit concerned about shredding roses and gooseberries because of the thorns, but the machine totally shredded all stems including vicious thorns, so I was left with nice heaps of organic materials perfect for mulching or adding to the compost heap.
Even in the middle of our winter period a trip to the allotment is not a lonely venture as the place does not lack activity from numerous keen gardeners enjoying this mild weather getting on with repairs to fences, sheds, greenhouses, or just meeting with fellow plot holders to discuss the weather. 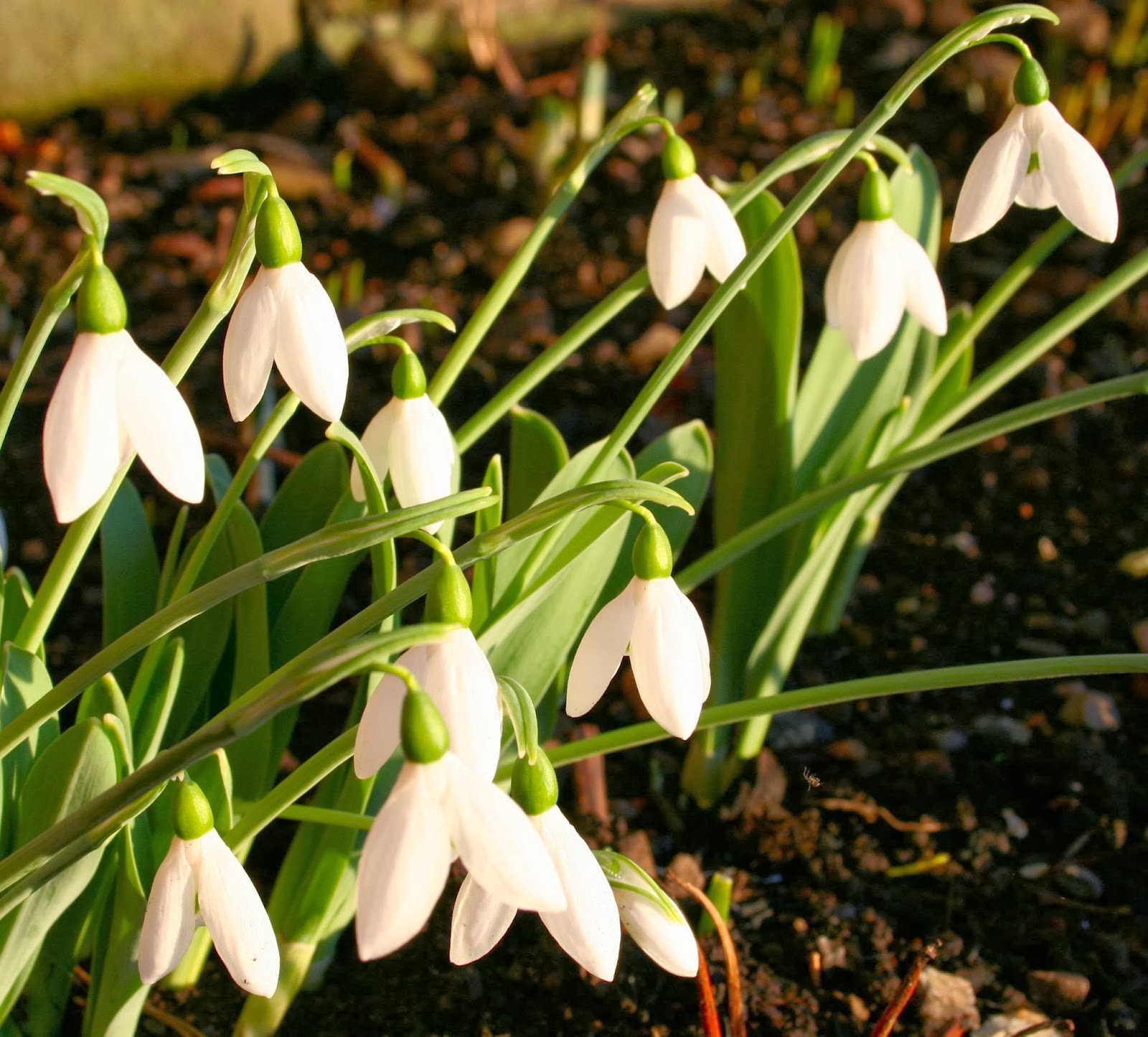 I can still harvest my autumn salads, numerous winter vegetables, and the beetroot left in the ground is still perfect. Garden plants are again as confused as us, but as the temperatures are very mild for a winter period they are responding as though spring arrived in January. I just hope that winter does not have a sting in its tail and land us with a late severe frost just when the garden is beginning to burst into growth.
Summer flowering half hardy fuchsias got left in the ground as I forgot to lift them.  They should be dead, but oh no, they are starting to grow again. It is far too early for them, but if we are lucky and winter gives us a miss they could be a star turn.
Snowdrops usually flower in February. In a good year they will flower in early February, but a lot later in a bad year. Mine were flowering in early January this year and looking great.

Aconites have been well budded up ready to open but still needing some warmth to expand the petals. The aconite drift is also showing a great germination of last year’s seed dispersal as well as growth of the one year old seedlings which will only produce one leaf and no flower. However most of these will flower in their third year. Patience is required then well rewarded.

Jasmine and hellebores are all flowering as there is no frost to slow them down. The very early flowering rhododendron dauricum has been brilliant in full flower from January. Normally it is quite early, but can suffer if hit by a frost but not this year. Hammamelis molis is also taking advantage of the mild spell with bushes covered in beautiful yellow scented flowers.

This is an excellent time to take cuttings of grape vines from greenhouse as well as those outdoors. While I am experimenting with a range of varieties for our Scottish climate the bushes do need pruning at this time of year and these pruning are fine for use as cuttings for new stock.
All you need is a small piece of stem with one or two good buds and insert them into well drained rooting compost in a propagator with some bottom heat. They should root after a couple of months, then they can be lifted out for potting up into small pots. They should grow fairly quickly so will need further potting up later on.
Christmas cactus flowered in early December, but then I dried them off for a winter rest. However this year they decided to have another go at flowering so now I am getting the second flush, so it is back to watering, full sun and a wee bit of feeding.
Geranium cuttings taken last autumn and potted up in November, are now needing spaced out as they are growing and need to be kept sturdy. I pinched out all the tops to make them branch and give then an occasional feed to keep them happy. 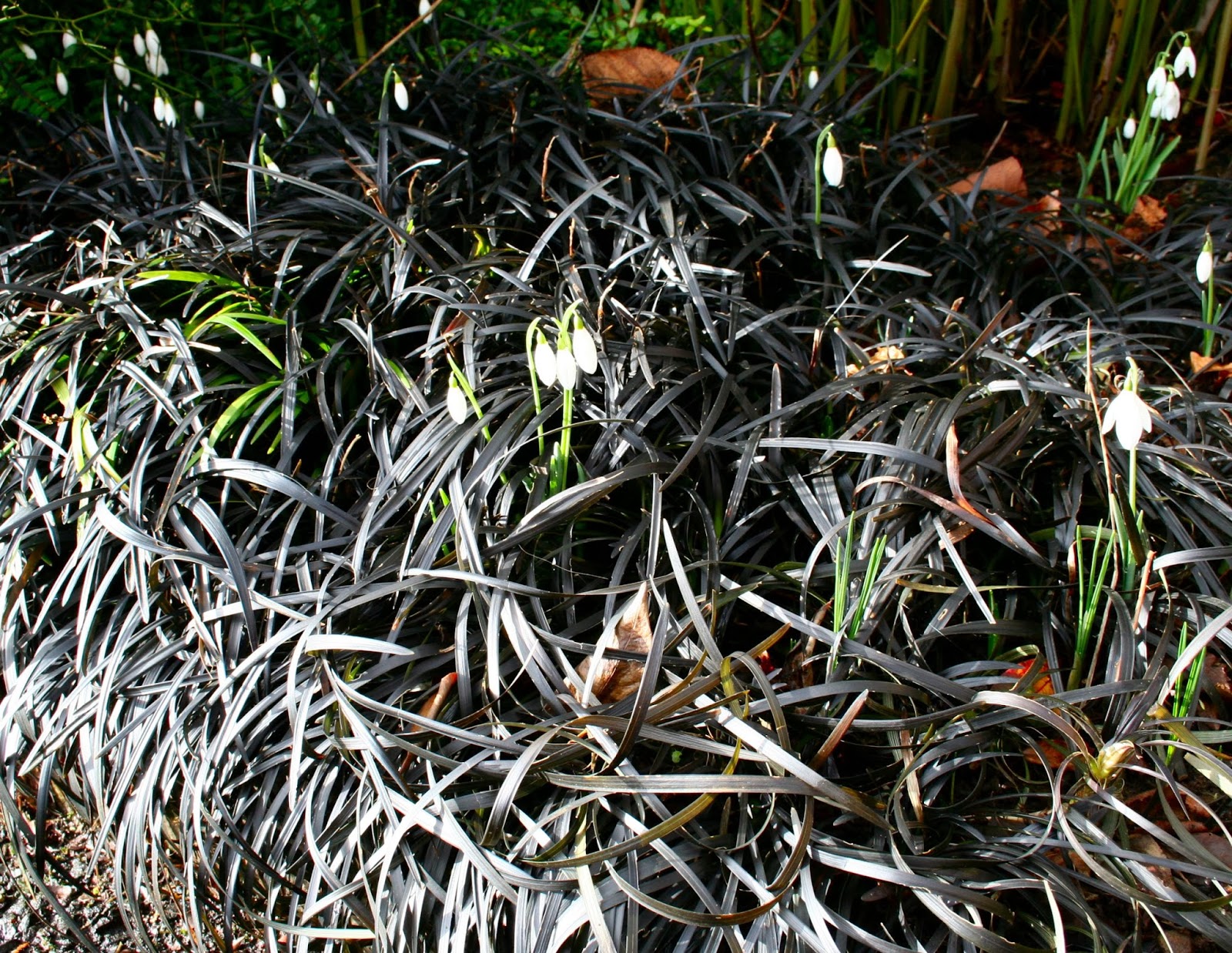 Ophiopogon planiscapus nigrescens is a low growing form of evergreen black grass. It can form large drifts as it expands through short rhizomes which root as they grow. It is very unusual and quite striking. I have a drift in my winter border in front of red stemmed dogwoods where it provides a great contrast in winter colour. It is even better in February when the snowdrops planted underneath the plants appear as the contrast of white snowdrops against black grass is brilliant.
Ophiopogon will grow on most soils but prefers moist rich soils and is happy in full sun or shade.