SASKATOONS GO COMMERCIAL
Amelanchiers have been grown in the UK for years, and are very happy on our soils, and our climate seems to suit them just fine. These bushes and trees have mainly been grown for their flowers, autumn colour and their ability to add variety to windbreaks, shelterbelts and woodland fringe plantings. The fruit from these is perfectly edible and quite tasty, but being small no-one bothers to pick and eat them. The large fruiting species of Amelanchier alnifolia, commonly known as the Saskatoon or Juneberry is very different. The fruit is similar in size to the blueberry, sweeter to taste and can be eaten fresh in season or frozen for future use or processed in yoghurts, juices, pies, compote, jams and wine.
About fifty years ago Murray Cormack, a scientist at the Scottish Crops Research Institute, now known as the James Hutton Institute, introduced them, as well as chokeberries and blueberries to see how they would perform in Scotland. I remember helping Murray to pick the first blueberries from potted plants in 1966. They certainly took off and became a major UK fruit crop. 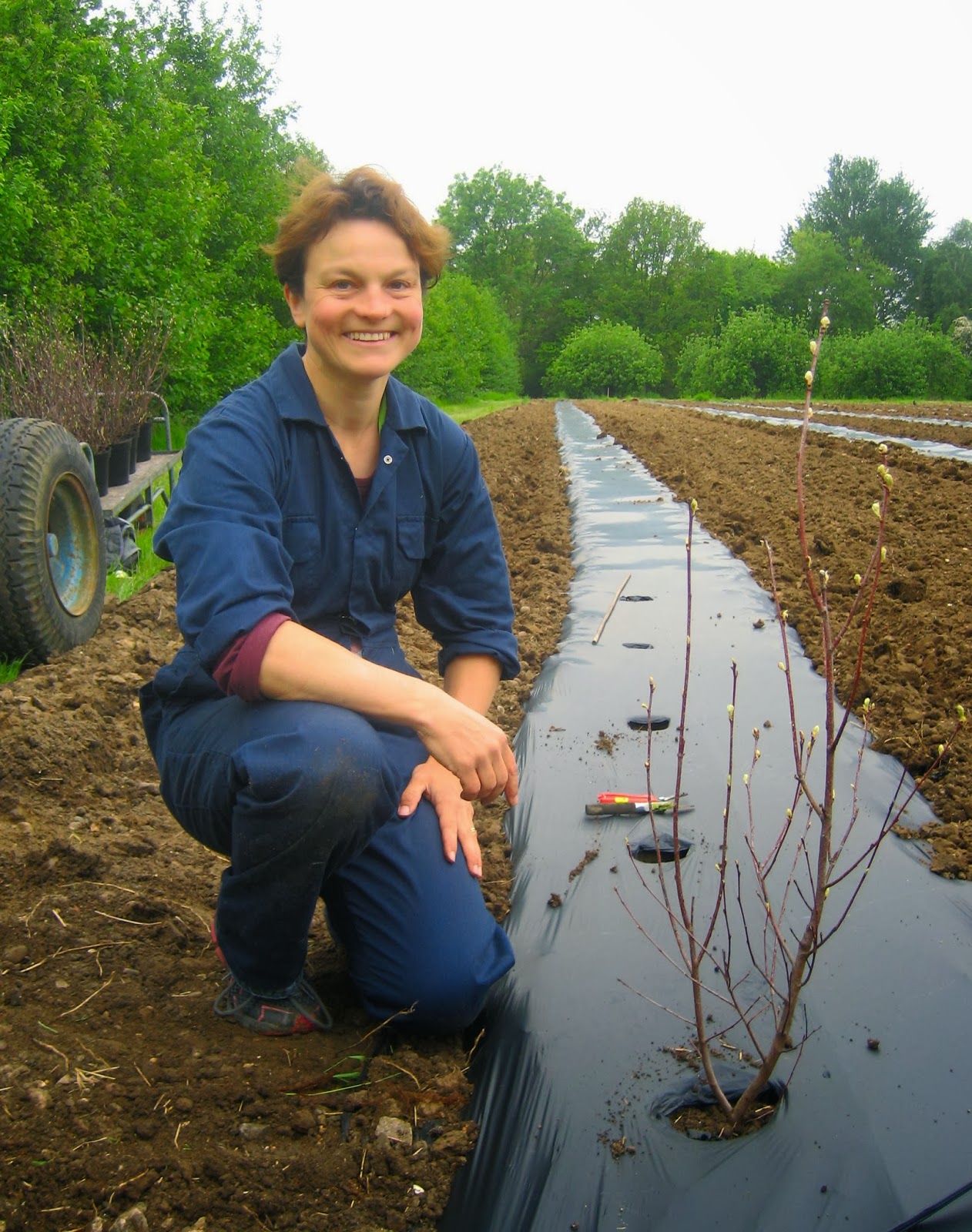 Aronias, (the chokeberry) and saskatoons have still to make their mark, but interest is now accelerating at a fast pace. Scientific research has identified the massive health benefits of black fruits with the chokeberry at the top of the list due to the very high levels of antioxidants and vitamin C. However the slightly astringent taste does not encourage people to come back for a second helping, though they are perfect when processed for jams, juices, compote and summer puddings, and they make a fantastic wine.
Saskatoons are also very high in antioxidants and vitamin C, but the fresh fruit is absolutely delicious. The main crops are grown in Canada and North America where demand far outstrips supply, so growers are planting new orchards at a fast pace. The pick your own fruit is a major industry as people just love to come out into the country to pick and eat the fresh fruit.
I have been growing saskatoons since 2004 on my small allotment at City Road in Dundee. Word soon gets around and now interest in this new fruit crop is coming in from all over UK and Europe. 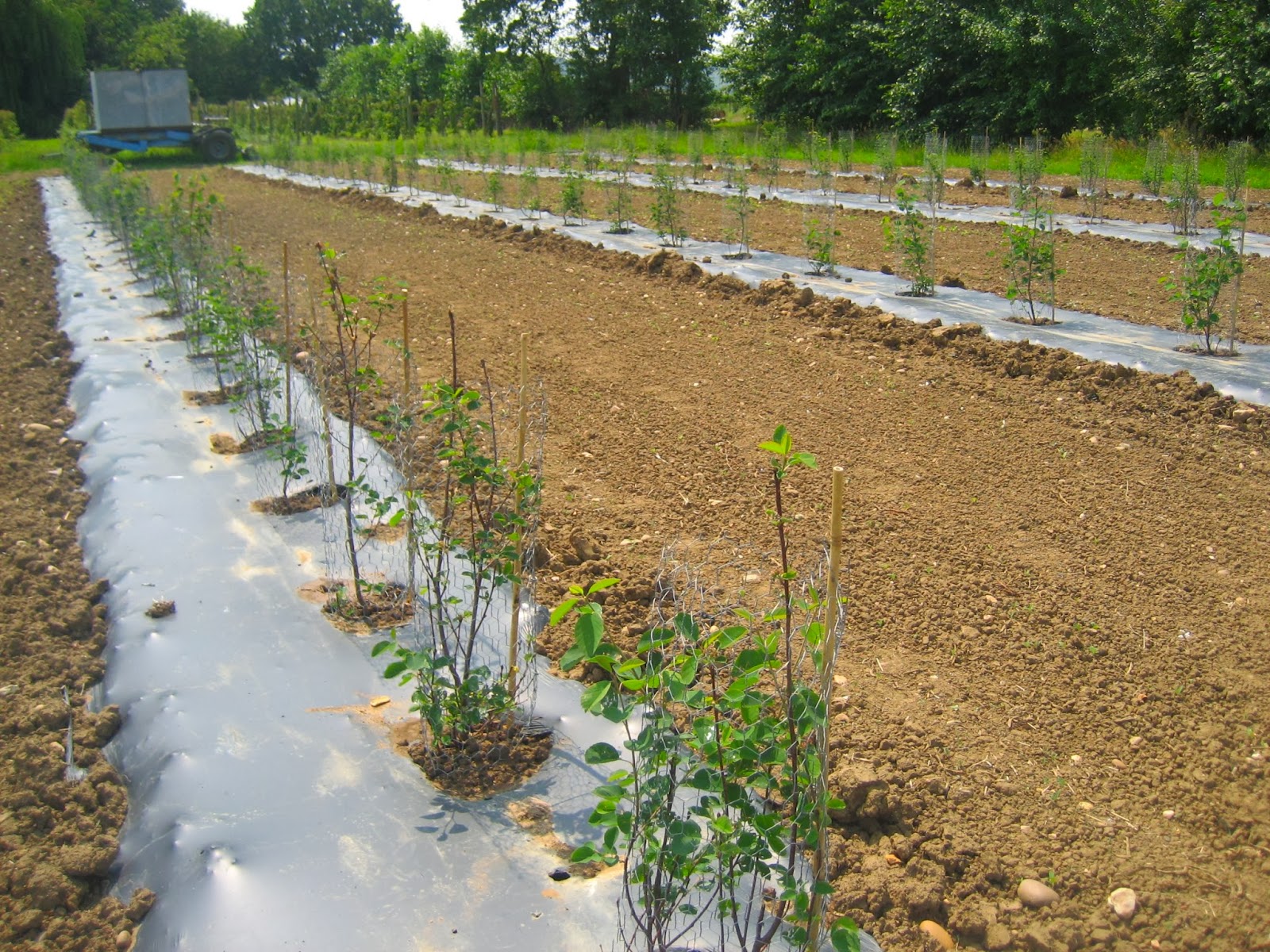 Two years ago I was contacted by Sophie Sidaway, a student at Pershore College asking about saskatoons as she had chosen this new fruit plant for a college study project. I told her to come to Dundee and see them growing here. She came to our allotment Open Day at the end of June, bought a few plants, and I gave her a few pounds of fresh berries to eat as well as extract seeds from. She was delighted later on in the year, when I sent her down a bottle of Saskatoon wine, and a few more pounds of frozen berries for her College project presentation. The College Enterprise Board were over the moon and awarded Sophie with sufficient funding and land to plant up a half acre.
Sophie got an import licence and bought in 334 three year old Northline Saskatoon bushes. The field was ploughed and harrowed, then six rows were marked out with fabric mulch and the bushes planted into these fabric strips over three days. Rabbit guards were placed around all the plants. 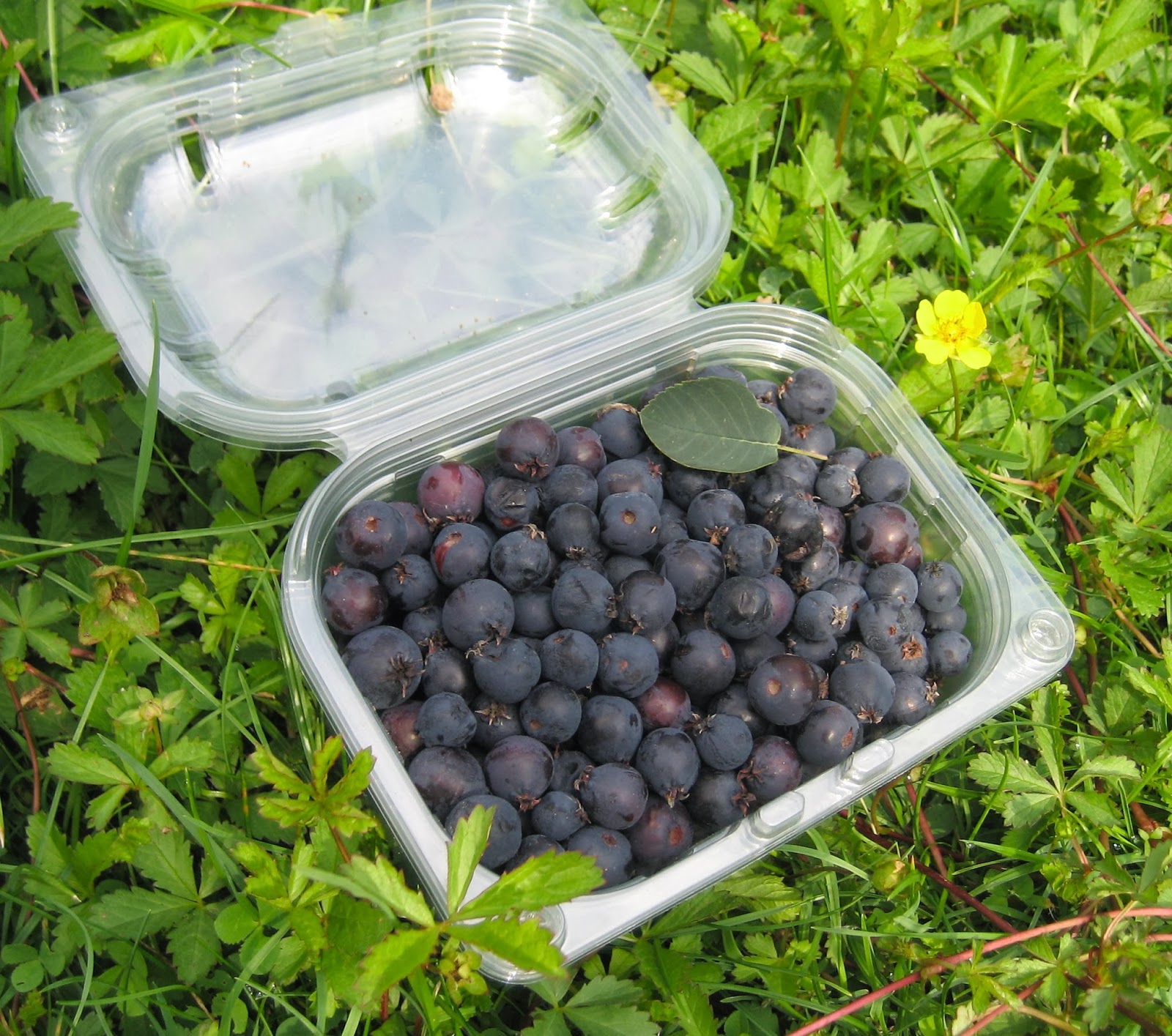 Sophie will have the field for a five year study, then hand it back to the college. The project has caused a lot of interest from locals who would like to obtain the fruit, pubs, restaurants, other fruit growers, and officials from DEFRA.
Sophie attended a presentation ceremony at Pershore Abbey where she received another award from the Worshipful Company of Fruiterers for her interest and aptitude in fruit growing. The certificate came with an award of £125 and a request for an article on saskatoons in their next newsletter. 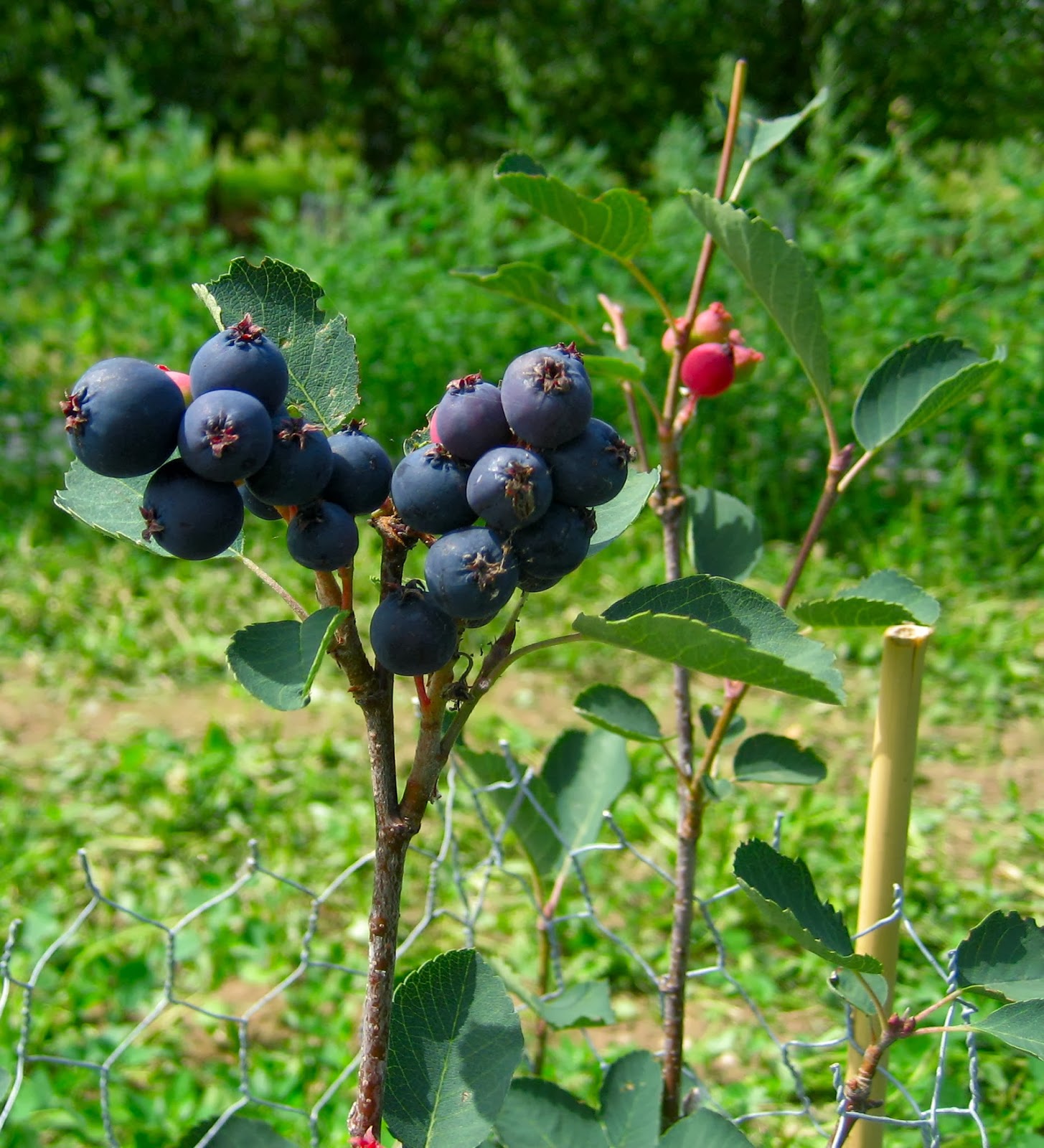 The new bushes flowered last year and gave Sophie her first small crop of berries. However these were kept for seed extraction giving her over 6000 Northline seeds for growing into bushes.
Sophie also got well over 200 plants from seeds extracted from the fresh fruit she got at our allotment open day.
It is Sophie’s plan to learn from this project then go into Saskatoon production for both fruit and young plants for sale once she leaves Pershore College.
I have found interest from Italy, Holland, Belgium, Ireland, Australia and all over the UK as well as California. It will not be long before the supermarkets start importing this fresh fruit, or encouraging local growers to get involved as it is so easy to grow here. Although very similar to the blueberry, it crops from mid to late July, so does not compete with the blueberry fruiting in August. 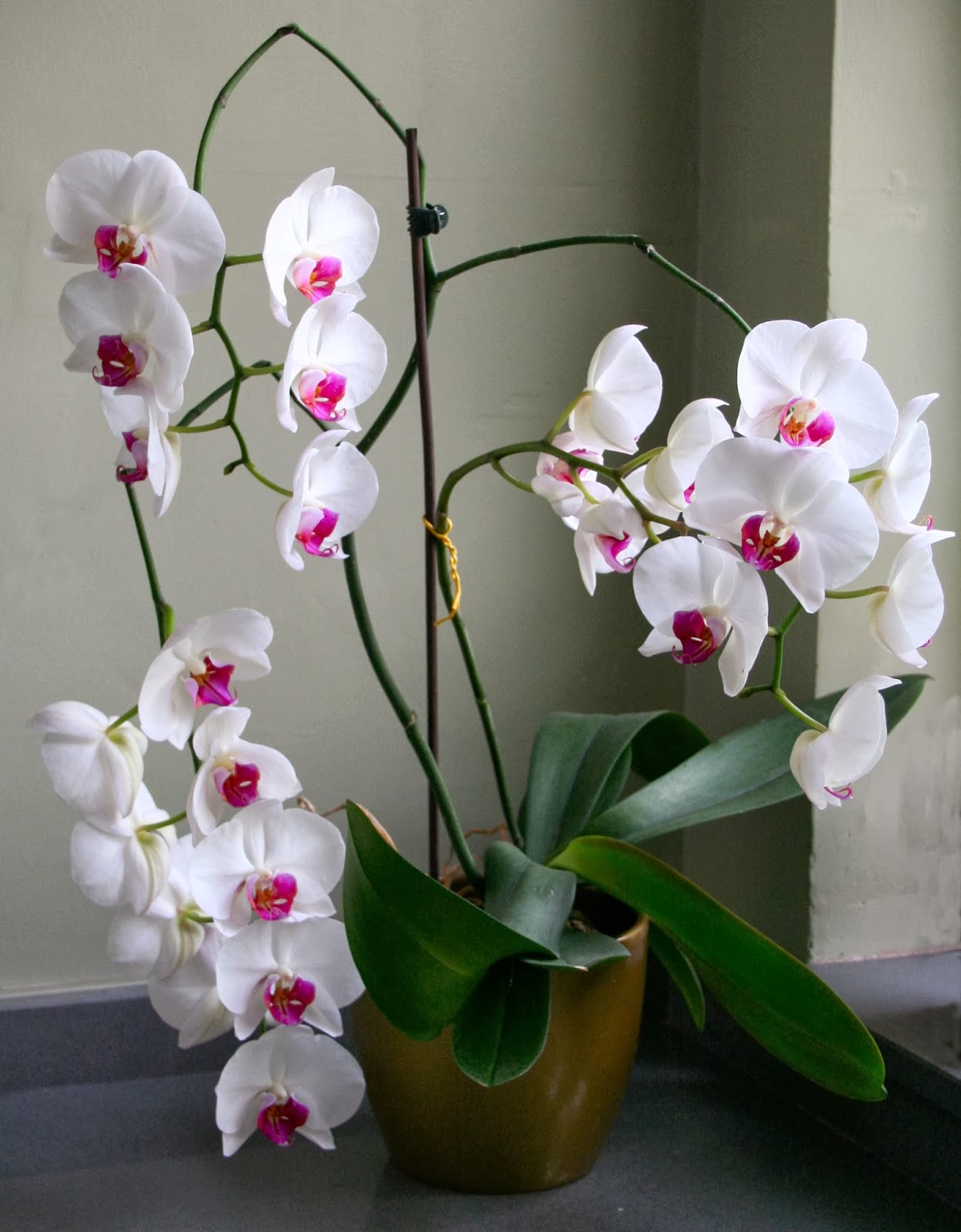 Phalaenopsis orchid is a very popular orchid as it is easy to grow, very reliable, and its blooms can last for several months. It often flowers in autumn to late winter after a spell of cool weather, though can flower all year round if it is happy with its environment. Once flowering has finished, cut off the old flower stem. It will produce two or three fresh leaves each year in late spring and summer. Water and feed regularly with a weak feed solution, but don’t let it stand in water. Since it is a tropical rain forest plant it likes good light (Scottish conditions) but not direct sunlight and a warm moist atmosphere. Bright bathrooms are favourite.
Repot every two to three years in orchid compost after knocking off some of the old compost and keep the size of pot just big enough to take all the roots. Don’t put the arial roots in the compost.