COLOURFUL CROCUS
The very mild winter has brought spring forward by several weeks so we can now enjoy those early flowers normally blooming in late March. My established drifts of crocus started to flower in mid February. They are very hardy and a covering of snow will not harm them, but a severe frost or cold gale will do them no favours. North east Scotland seems to have missed most of the very wet weather affecting the south and west of UK, so our crocus just need a wee bit more sun to open up the flowers and let us know that spring is just about here.
Crocus species grow in many different countries all over the world and now cultivated varieties have been bred to provide us with very colourful displays in spring for our gardens. 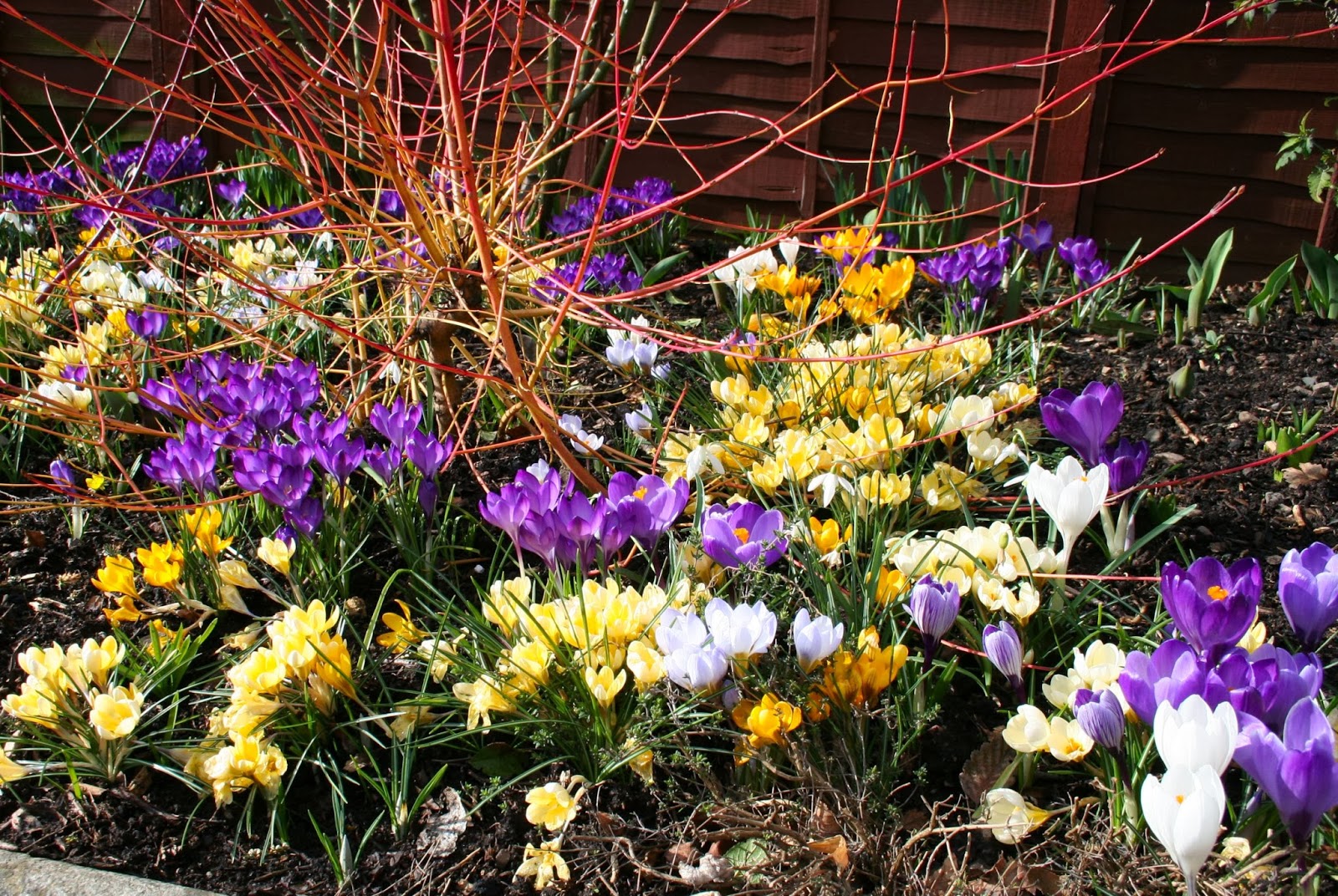 Local authorities have also recognised the benefits of enhancing the beauty of the environment by mass planting crocus in drifts where ever space allows in verges, roundabouts and parks.
When I worked in the Darlington Parks Department, many years ago, the council had established a “Crocus Walk” in a deciduous belt of trees along the main road into the town. Residents were very proud of this attractive feature and in autumn several offered funds to extend the crocus displays further into the town. The council matched this funding and over the next few years our Ring road grassed reservations received masses of crocus bulbs to brighten up the town in spring.
After flowering it is necessary to leave the foliage alone so it can build up the corm to a good flowering size for the following year. Usually a period of six to seven weeks is ample before the leaves can be removed. However in gardens where crocus is in border soil leave the foliage till they begin to go yellow.
The show begins with the crocus species flowering about two weeks ahead of the large flowering hybrids. Cream Beauty and Blue Pearl really go well together, and enhanced with the pristine white Snow Bunting. Add some stronger colours to add character such as Ruby Giant and Whitewell Purple.

However it is the larger flowered Dutch hybrids that really add impact to spring displays. Although there are many varieties the most popular come down to a handful that are hard to beat.
Yellow Mammoth must be the biggest and brightest yellow, Joan of Arc the cleanest white, Flower Record a strong purple and Pickwick has always been my favourite striped crocus. 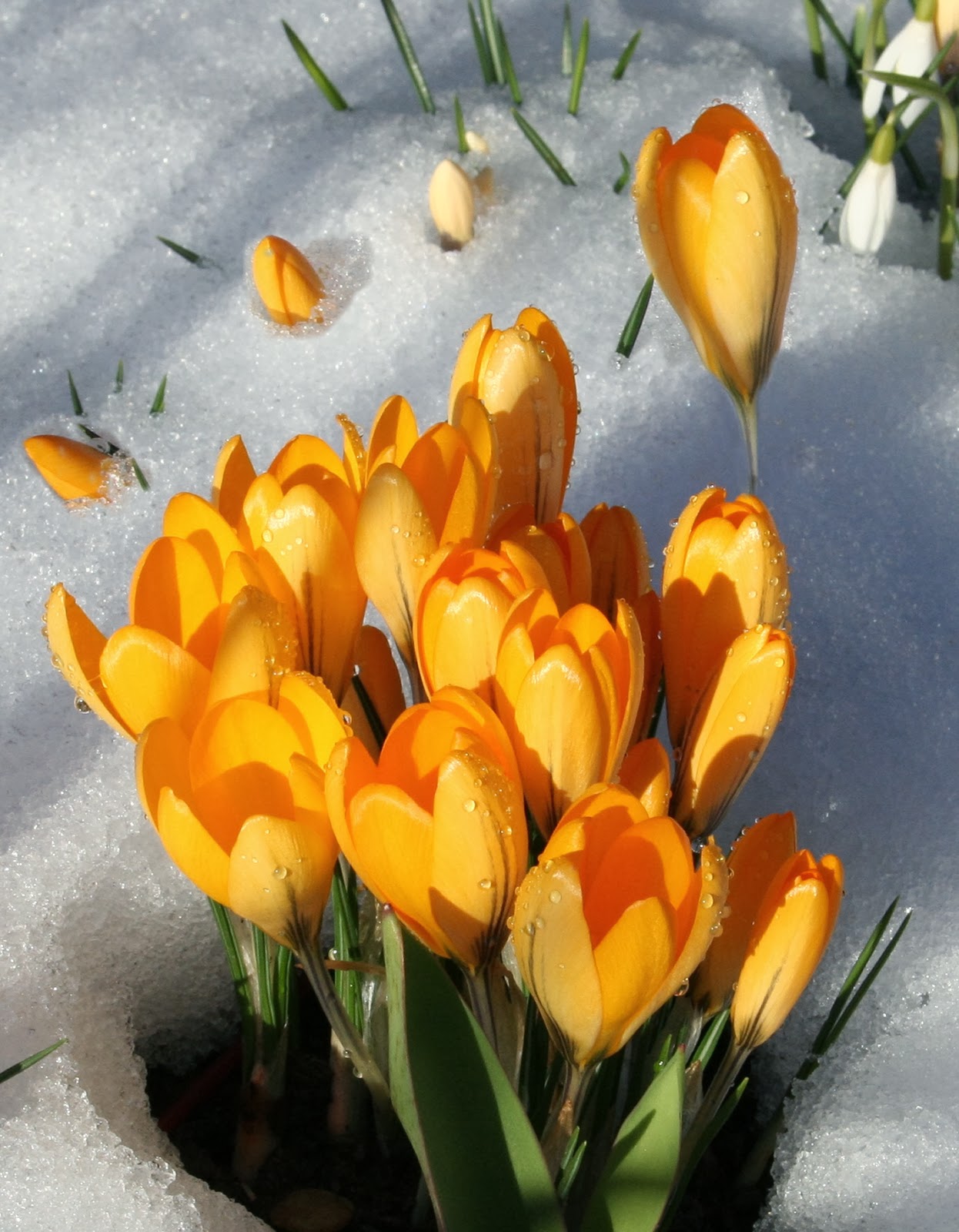 Some species flower in autumn such as Crocus pulchelus, Crocus zonatus and there is several varieties of Crocus speciosus in blue and violet colours. These all flower in late summer to  autumn before the leaves appear. They are all very hardy and leaves emerging in autumn will be fine over winter. Do not cut or remove the leaves until they die down in late spring.
They can be planted in drifts in borders or the lawn in good well drained soil and prefer full sun, though some dappled shade will still be fine. Planting can be done by splitting up overcrowding clumps immediately after flowering, or plant fresh new bulbs in summer.
The saffron, crocus sativus also flowers in autumn and has been in cultivation for centuries. However it was not grown for its flower displays but for the world’s most expensive spice, saffron.
Each flower produces three long red coloured stigmas which are removed and dried to make saffron. It is a very slow process as you need a lot of flowers, which usually only last about two weeks to gain any useful quantity of product. Most of the world’s saffron is produced in Iran which has the best climate and soils for its production.

Cordyline australis is a half hardy palm tree from New Zealand. It is often started off as a young plant used to give height to a summer bedding flower display. It will establish and grow fairly easily, but it is best to lift up and replant in a large pot to overwinter in a frost free greenhouse. In its second or third year it can be left outdoors where it can grow and survive if in a sheltered spot. If the next few winters are mild it will survive and eventually grow to ten to twenty feet before it flowers. These are not desperately attractive so probably best removed as they can weaken the tree.
However every so often we get a hard winter which will kill the top right back to ground level, but do not dig it out as the roots usually survive to throw up new shoots within the next couple of years. My twelve years old cordyline reached ten foot tall but then died back in a severe winter. It survived to produce a cluster of five shoots which are now six foot tall. As this winter has been very mild it should live another year or more with the promise of global warming.