The feel good factor runs high when the first crops of the year are advanced enough to pick. After a rhubarb picking in April, this usually starts off at the beginning of May with lettuce Hilde overwintered outdoors in a sheltered spot. The outside leaves may be a bit storm battered but the centres are soft and tender and the fresh flavour is hard to match. This is followed by the radish, lettuce and spring onion grown under my low polythene tunnels on the allotment. First crops are ready in early May in a normal year, but mid May in this cold year with strong cool winds. Radish grow very fast under a tunnel, so this crop was soon used up and the space used for a second batch of spring onions grown from seed germinated in plug trays. 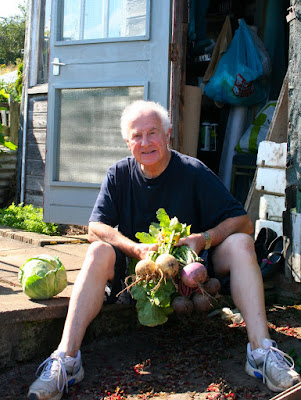 The tunnel also has a small batch of beetroot but it will be mid June before we can enjoy some fresh baby beet.
Strawberry Mae grown under tunnels started to crop in mid May and will provide the first batch of fruit for the next three weeks before Elsanta ripens up.
Overwintered crops, (leeks, kale, Swedes, sprouts, cauliflower Aalsmeer and parsnips) are all finished apart from a batch of rocket salad leaves which started to go to seed, but was then cut back to give some more young leaves. Red stemmed chard also ran to seed and was promptly cut back to give more young shoots in a few weeks time.
Spring cabbage suffered a lot of clubroot disease, so remaining plants were quickly used up. 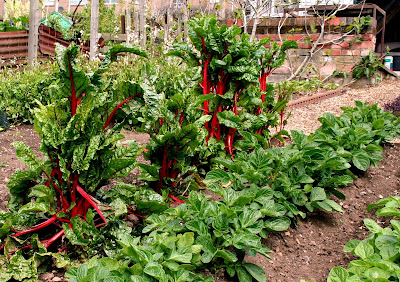 Now we are in June and warmer weather is quite possible, some of my early sown Golden Ball turnips can start to be lifted as small roots to allow the rest more space.
Rocket sown at the end of March is now just about ready for the first harvest of leaves, and once it grows a wee bit bigger I can remove last years row of rocket.
We must not forget our old and well established clumps of rhubarb which have been giving us fresh sticks since the end of April. Timperley Early is always the first to pick. It will be used for compote mixed with some frozen strawberries from last year as well as a jam blended with Saskatoon berries also from the freezer. Saskatoons have a sweetness that is enhanced by the acidity of the rhubarb. 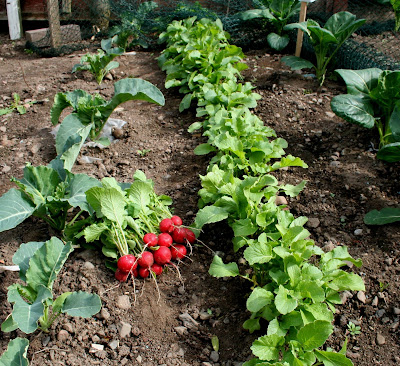 Early potato International Kidney was planted at the end of March. Although weather has been cool with strong winds we have not had any frosts so growth has got away quite strongly. Earthing up was completed in mid May and I hope to sample my first salad spuds at the end of this month, though a lot depends on the weather. The first pickings will give smaller potatoes if a wee bit too early, but that is no loss if the taste of those first salad potatoes is to die for. A useful guide to harvesting is when the first flowers appear as the plant is then mature, though bulking up is only just starting.

Finish off planting up any bare areas in the flower borders using spare summer bedding plants such as impatiens, marigolds, geraniums or petunias.
Spring flowering hanging baskets with polyanthus and pansies have been replaced with summer flowers, but the pansies still had plenty of flowers to come so they have found a spot between some young newly planted shrubs. The polyanthus have been lined out to grow on, and will be used for bedding in the autumn to flower the following spring.
Sow wallflower seed thinly in rows outdoors, and then after a couple of months they will be ready to transplant into nursery rows to grow into strong bushy plants for autumn planting. They are perfect for flower beds with tall Darwin hybrid tulips planted in between each plant for a glorious spring display.