POTTERING AROUND
Early summer is the time of year when we have caught up with most of the major gardening tasks, but there is a never ending list of wee jobs needing our attention, so we potter around. Then as we complete one wee job we sit down in the sun and have a coffee.
Most of the allotment is now planted up and the long cool spell of relatively dry weather has meant that weeds have not been much of a problem so far. However my tatties have emerged and earthing up should keep them happy for a fair bit. 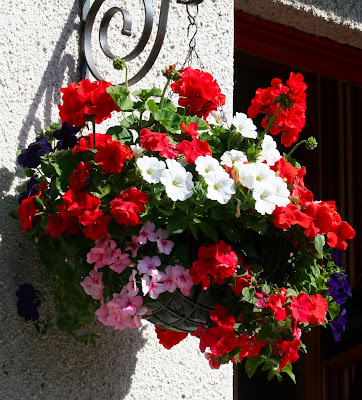 Other vegetables
Beetroot, turnip and parsnip all germinated quite well so thinning was needed to let individual plants have room to grow. Germination of peas has been very poor, but I put that down to bad seed, as my supplier, who also supplies many of us at City Road, won’t be getting any repeat orders next year. Other seed supplied from same source has been very poor. There are plenty other places to try for our seed orders. Leeks germinated a month ago but growth has been very slow so transplanting is still a fortnight away. Onion Hytech grown from seed and planted out several weeks ago is also growing very slowly, but lack of any warm weather does them no favours. 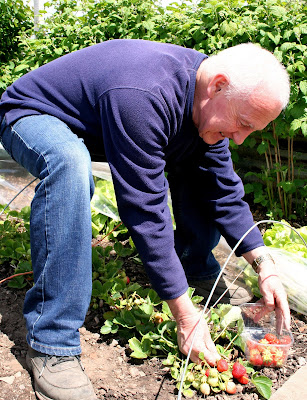 Cabbage, cauliflower and brussel sprouts have all been transplanted and are establishing well. Both cabbage and cauliflower are being sown in three stages several weeks apart so I can harvest small quantities over a longer period, cutting out previous year’s gluts. Keep an eye out for the cabbage white butterfly caterpillers and remove as soon as seen.
Courgettes, squashes and pumpkins have now all been planted out as it is the right time by the calendar, but I would be happier if we got a bit warmer weather to cheer them up.
Remove poly tunnels from early salads as the weather is warmer and this will reduce the need for constant watering. Radish, lettuce and spring onions have all been ready for use since mid May.

Fruit crops
Put nets on strawberries unless they are under polythene tunnels, and bed them along the rows with straw to prevent soil splashing onto the developing fruit. Although I feel our seasons are running a fortnight later than normal, I was happy with my first picking of strawberries under tunnels the third week in May.
Remove diseased leaves from peaches infected by peach leaf curl.
Fruit crop potential from bushes and trees looks excellent at this stage except for my peaches and pears. They flowered quite late, and there were plenty of bees around, but at that time there was any amount of other plants in full flower so bees could be choosy. So although there was plenty of flowers on the trees the crops looks to be very scarce.

Flowers
Thin out annual flowers such as poppies, calendulas and godetia sown from seeds if germination is good, or use some as transplants. 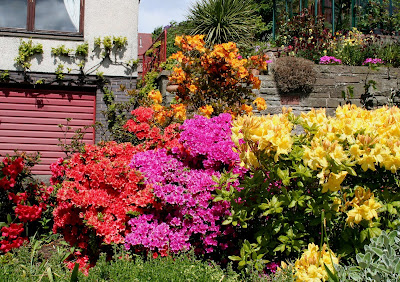 Prune kerria, spirea arguta and forsythia and other spring flowering shrubs, removing old flowering shoots so new growth can fill the space and ripen up in the autumn for flowering next spring.
Dead head rhododendrons and azaleas once flowering has finished so they can keep their strength for producing strong young shoots which will flower next year.
Plant up hanging baskets, beds and tubs with geraniums, begonias, petunias, impatiens and trailing lobelia to give us the summer colours.

Wee jobs to do this week
Turn compost heap once it is a couple of feet deep
Keep pruning grape vine sideshoots to one leaf only now that the bunches have been secured.
Remove sideshoots from tomatoes grown as cordons and continue weekly high potash feeds.