Early summer is that in between stage, when the bulbs and other spring flowers are all finished and the summer flowers and roses have not yet got started.  It is often said to be the green phase in the garden, as it rests after the spring floral feast to build up its reserves for the summer bonanza.
Yet when we look around there seems to be no lack of plants in flower from ground cover, border plants, herbaceous and shrubs. 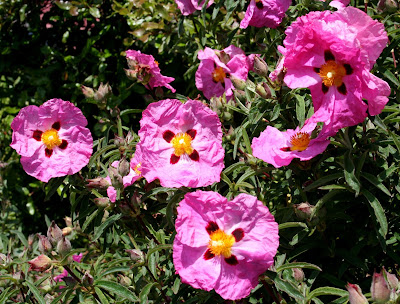 The old foliage from snowdrops, aconites, daffs and tulips has all been removed and added to the compost heap, and hoeing for weeds is on its second run. Once this old foliage is gone, we see quite a few bare patches which is ideal to use up all our spare bedding plants of geraniums, begonias, impatiens, petunias. We now have a clean garden completely planted up, so there is nothing to spoil our summer flowers. We can wander around and enjoy the odd flowers during this in between stage.
It is surprising to find that a lot of these flowers belong to the poppy family. The boldest displays come from the herbaceous oriental poppies with their massive bright red flowers. Another herbaceous perennial is the deep blue flowered Himalayan blue poppies which are not bold but a very relaxing deep sky blue colour. Then the biennial Iceland poppies which are semi naturalised in our garden give us the orange, white and lemon yellow flowers. We have two annual poppies that have become established as an annual event without any sowing or planting. They just reseed themselves every year, and they put on such a fantastic display that we just let them get on with it. These are the orange Californian poppy and poppy Ladybird which is bright red with a black blotch. 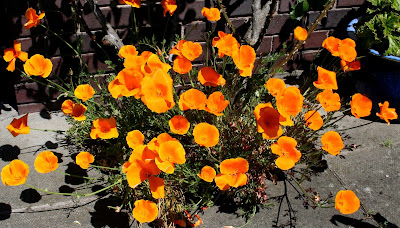 Another herbaceous plant at its best in June is the flag iris. There are numerous bold and very colourful varieties to choose from so go for the best. They have colour and scent and are very easy to grow in a sunny spot with very well drained soil.
Back at ground level the succulent Delosperma nubigenum growing only an inch high, but smothers the ground so no weeds can compete, and is a mass of yellow daisy type flowers providing you give it a sunny well drained spot. I have several plants growing in crevices in our tall retaining walls. They don’t have any soil, and get dried out very quickly, but they just seem to love it.
Slightly taller are several Campanulas at three inches tall but covered in deep blue purple flowers.
Then the garden pinks growing up to a foot tall give us a whole range of red, pink, mauve and white highly scented flowers. 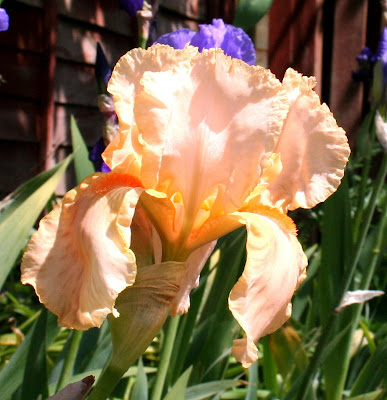 Garden shrubs are often used to give us shelter and privacy and provide the intermediate stage between garden plants and trees, but many can also be highly attractive when in flower. For dry sunny gardens the Cistus types such as Silver Pink and Cistus purpureus are at their best in June as is the taller blue flowered Ceanothus thyrsiflorus.
Again another medium sized shrub for the seaside and drier gardens is the dwarf brooms, Cytisus praecox and Genista hispanica, both of which are a mass of bright yellow flowers.

Greenfly are having a great time so check over vulnerable plants and rub off where practicable. Blackcurrants and gooseberries are a bit prone so remove the growing tips if badly infected.
Now that the weather has improved and weed have started to grow this is an ideal time to spray with roundup weedkiller, especially if perennial weeds are a problem. Some weeds such as Japanese knotweed, mares tail and even couch grass may need two sprays a month apart. On cultivated soils keep the hoe going to keep on top of annual weeds.
In the greenhouse ventilate every day to keep a buoyant atmosphere so condensation does not build up over night. Good ventilation also helps to prevent fungus diseases on tomatoes, cucumbers and grape vines.