Early Summer in the Garden

EARLY SUMMER IN THE GARDEN
Recent warm, dry weather has been great for weed control but watering some recently planted crops and flowers has been essential. Watering is best done in late evening if time permits.
Now is the time to potter around the garden as the hard work of preparation is complete, and planting done but numerous other small tasks seek attention in between relaxing on the sun lounger when its too hot to work, but of course with thoughts of planning the next few tasks.
The Flower Garden 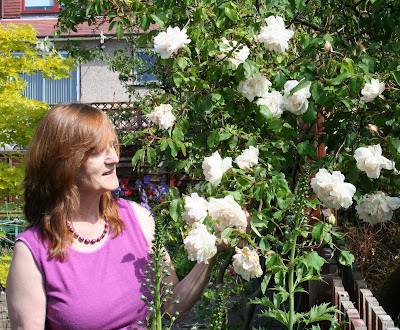 Most Rhododendrons and Azaleas have flowered so remove the old seed heads to conserve energy for growth.
I have an excellent drift of delphiniums grown from seed obtained from the specialists Blackmore and Langdon in Bath. These are quite vigorous so need good staking and tying in
I grow both decorative and spray chrysanthemums on my allotment, but this year I am trying the sprays at the end of my herbaceous border to add colour in late summer when most of the other plants have finished. These sprays will get the tops removed twice to make sure they are well branched and hopefully dont need staking but I'll keep an open mind on that.
Iceland poppies have been outstanding yet again so I will save seed for sowing in a week or so to give me plants for planting in autumn or next spring. 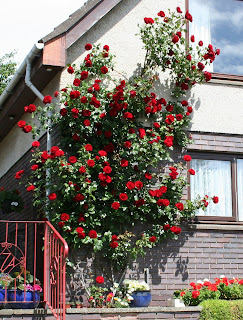 Recently sown wallflower seeds has now germinated but will get transplanted later into rows for growing on.
Roses this year have never been better. Vigour is strong and pest and disease so far not been a problem. The climbers Madame Alfred Carrier, Etoile de Holland, Dublin Bay, Gertrude Jekyll and Morning Jewel have all been terrific, and the bush roses are now all in full flower. Very hard to pick a favourite.
Gertrude Jekyll is a pink highly scented old English shrub rose but can be grown as a climber as it has enough vigour and given the the right pruning for covering a wall or fence. I am also using shrub rose Graham Thomas as a climber to replace my Golden Showers, once one of the best yellow climbers, but after three wet years it got wiped out by black spot.
The Fruit Garden

The strawberry patch has been strawed to keep soil from splashing on the fruit during wet weather. Not been any of that for a wee while, so the fruit has been fantastic with hardly any rots. I have been very slow to get the nets on, but for some reason there is no damage from birds. Maybe they dont like my early variety Mae.
The first fruits were picked from my new perpetual variety Malling Opal. As with the previous one I grew, Flamenco, the fruit may not be as shapely as summer fruiting Honeoye or Elsanta but the flavour is excellent.
My thornless bramble Helen trained on the east side of my allotment shed has been a picture while in full bloom, but now the young shoots growing from the base (next years crops) need careful tying in as they are very brittle. This variety is very early fruiting in August but has great flavour and very small seeds so is excellent for jams.
Check over apple trees and remove any primary infections, ie. young shoots that have been infected by overwintering mildew spores. The young growths are stunted and totally covered in mildew ready to spread to the rest of the tree. Remove these immediately you see them.
My pear tree is a family type with two varieties grafted onto the same tree.
As is normal the more vigorous one (Comice) dominates and the weaker one (Conference) which gets overwhelmed. Comice is a terrific pear if scab was not a problem, but after three very wet years scab has taken a hold and virtually wiped out the Comice. Conference is less prone to scab but not a great pear in Dundee. I must graft some decent varieties onto this tree next April and cut out the Comice.
The Carse of Gowrie has a history of fruit growing and in the past top fruit predominated but now it is mainly soft fruit. There is a renewed interest in its heritage and there are still many of the old varieties to be found. Hopefully I will locate a good pear able to tolerate scab and do my wee bit to preserve a good old type.
The cold winter seems to have wiped out a lot of pollinating insects so although my Victoria plum tree was quite late in flowering there were no insects around to pollinate it. I even have a Berberis darwinnii planted at its feet to attract bees who just love it and it flowers at the same time as my plum. It is usually very successful in attracting pollinating bees, but this year I only saw two large bees. They must have been very efficient as I now have a fantastic potential plum crop.
The Allotment 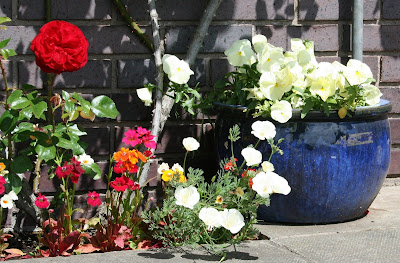 Watering has been the main task this week keeping my courgettes, pumpkins, Swiss chard, lettuce and sweet corn growing through the dry spell.
I utilised the two failed rows of parsnips with a sowing of lettuce and radish, though giving the successful four parsnip seedlings every protection. If any greenfly wanders anywhere near them they are in deep trouble.
Mangetout sugar peas needed some support, so netting on a framework of posts and rails usually keeps them tidy and easy to pick.
My brassica rows of summer cabbage Golden Acre, winter savoy Traviata and my curly kale are all looking good. None have needed watering. Netting from pigeons seems to have worked, though even those unprotected have been left alone, (for now)
Could be that on an allotment site of over sixty plots there is ample food so damage is not too severe.
However I keep checking them for cabbage butterfly caterpillers and just pick these off as they appear.
You must also do the same on the gooseberries as sawfly caterpillers can multiply and devastate the bushes very quickly.
My Cape gooseberries (Physalis edulis) planted three weeks ago have been very slow to establish, though usually they are quite vigorous by late summer. I have a few more in pots in the greenhouse just in case we get another cool wet summer. 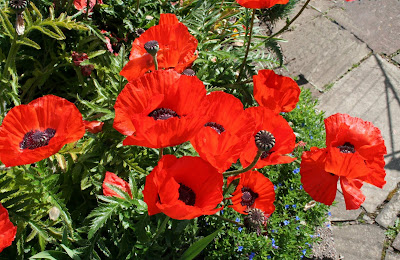 The Cold Greenhouse
Tomatoes continue to grow with constant watering and feeding and removal of sideshoots.
Grapes, Black Hamburg and my red seedless variety Flame require continual summer pruning of removal of shoots at two leaves after the fruiting bunch then one leaf after that.
This allows ample leaf cover to grow a good crop but not too much foliage otherwise mildew and botrytis could take hold. Keep plenty of ventilation at all times and leave the door open on any hot days.
Check for vine weevil beetles late evening and early mornings when they can be seen feeding and dispose of them before they lay hundreds of eggs that emerge as maggots doing untold damage.
End
Posted by John Stoa at 21:09