Flaming June did happen this year

FLAMING JUNE DID HAPPEN THIS YEAR
The summer returned this year after three years of cool and wet weather following a very long and cold winter. That is the kind of normal weather I remember from childhood to youth, before global warming appeared and weather pattern became guesswork.
The garden plants have responded with strong healthy growth, a lot less pest and diseases, flowers in profusion and fruit crops to come, full of potential. 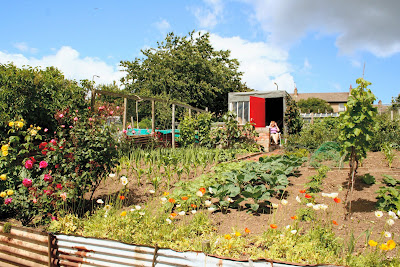 Some outdoor fuchsias never made it through the winter, hebes were lost as well as my Leptospermum Red Damask, however Fuchsia Mrs. Popple has sprouted from the base and will have its first flowers by the time you read this, despite the attention of the greenfly and frog hoppers, (cuckoo spit).
Always give apparently dead plants plenty of time after a hard winter to recover before you dig them out. Some years ago I had a 15 foot tall Cordyline australis the Torbay palm, that died after a very hard frost. It was cut back to ground level, but then 18 months later five new shoots appeared and it sprang back into life. A lesson was learnt. Eucalyptus can also be a bit tender when young though my twelve year old specimen has never looked better.
Robinia frisia, the false acacia, an excellent small tree with golden leaves suitable for domestic gardens lost a few branches but soon recovered. It needs good drainage at its feet to survive the winter, otherwise die back of shoots get infected with the coral spot fungus which can then spread to healthy wood.
This year it was the turn of my date palm, Phoenix canariensis, to die back to ground level after successfully growing outdoors in a sunny border for six years as a specimen dot plant in the middle of a flower bed. It got chopped back to ground level but I see it is trying to make a recovery.
The Flower Garden
Glorious colour abounds in herbaceous borders, rose beds, climbing roses, flowering shrubs and in tubs, hanging baskets and borders with summer bedding plants.

Dead heading to remove seed heads is a constant task with Rhododendrons, Azaleas, Himalayan blue poppies, Iceland poppies, and winter pansies who wont stop flowering. I have never known them to continue for so long so I keep feeding and watering them.
Seeds gathered from the Meconopsis, Himalayan blue poppy, and the Iceland Poppies will be sown this month. I hope the Iceland poppies will germinate fairly soon as they are to grow on for flowering next spring, but the Meconopsis will probably not germinate till next spring. Keep both of them moist, shaded and cool to assist good germination.
My bed of geraniums grown from cuttings every year is a mass of colour, but my other summer bedding plant the tuberous begonias have yet to put out their first flowers. They are looking very strong. I purchased a tray of fifty mixed double non stop tuberous begonias about 15 years ago. They flower reliably every summer then get dried off, and overwintered in a box in the garage,
They never let you down.
Excellent value for money.
The Fruit Garden
A funny year for fruit. I have been too busy on other activities, painting flowers, and running art classes, so I never got around to netting my strawberries to keep the birds from eating them. I never lost a single berry, yet the local blackie took a liking to my red currant bushes so these got the strawberry net for protection. I have not needed to net red currants for the last four years. Birds left them alone, but not this year.
The net has also been erected over my saskatoon patch as they are so favoured by the birds that they will even attempt to tunnel underneath the net if it is not buried around the edges.
The saskatoons, Amelanchier alnifolia, should be ready for picking mid July probably at the same time as my red currants, black currants and gooseberries.
This year I only have Autumn Bliss raspberries as my row of Glen Ample got infected by a root rot fungus which wiped them out. I think it was phytophthora but cannot be certain.
There replacement variety Cascade Delight will not bear any fruit till next year, (hopefully)
Apple trees are quite heavy with crop, but the natural June drop did some thinning for me. I then did a little bit more to space apples out so I get larger fruit.
My variety Fiesta has adopted a biennial fruiting attitude with only five apples on a young tree that gave me over forty last year.
I will cover fruit crops in greater depth next week.
The Scottish Crops Research Institute will be holding an event for those in the fruit industry on Thursday 15th July at Invergowrie to showcase developments and trends in their breeding and research programmes. This cutting edge technology eventually filters down to gardener level as we benefit from the release of new fruit varieties with enhanced cropping potential, better flavour, more disease resistance, stronger vigour and acclimatised to Scottish growing condition.
The Allotment 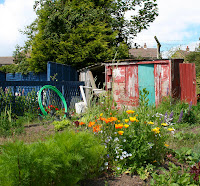 Two rows of Beetroot Bolthardy germinated very well so they required a thinning to leave them about an inch apart. These will grow into lovely baby beet size before a further thinning to four to six inches for the main crop. Last year our beetroot was left in the ground unprotected until winter digging time in January and was still excellent. The cold winter did not do any harm. We use beetroot for soups mixed with potato, onion and a wee bit of orange rind, then finished off on the plate with some yoghurt or sour cream swirled into the surface. It is brilliant and most likely very healthy.
Leeks are another vegetable that are very easy and rewarding as they keep you supplied with fresh vegetables right through the winter till March, or April in a long cold winter.
I plant mine out in rows twelve inches apart in the traditional style on good ground manured or composted in winter. Take out a shallow furrow and dibble in holes about four to six inches apart. Lift the young seedlings when about eight inches tall and top and tail them before dropping them in the dibber holes. Water them in and leave them alone.
Fresh vegetables are now being harvested for the table regularly. Lettuce. radish, spring onions and now the first courgettes and Swiss chard leaves. The former makes fantastic soup and the latter brilliant as a stir fry ingredient but dont use much oil. 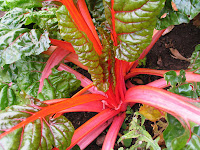 The social side of allotment gardening brings people together at this time of year to swap spare vegetable plants, tomato plants, courgettes, pumpkins, leeks and other new types worthy of a trial, and when its too hot to garden there are always plenty of sunny patios to sit down and relax on.
The Cold Greenhouse
As the heatwave continues most plants that had greenhouse protection have been moved outside leaving the grapes and tomatoes and four pots of Cape gooseberries which continue to grow very strongly. At this moment I still have space for them, but if they get much bigger they will need to go out somewhere.
End
Posted by John Stoa at 14:15