Summer Fruits for a Healthy Lifestyle

SUMMER FRUITS FOR A HEALTHY LIFESTYLE
There is so many easy to grow summer berries that just spoil you for choice, and if you have access to an allotment you can really indulge in a huge variety that will keep you enjoying fresh fruits from June till the frosts come. However most can be stored in freezers to maintain that summer luxury all year round.
Although we have grown up in the Dundee area with berry fields everywhere and people of my generation spent many days during the summer holidays picking rasps and strawberries.
It was always a seasonal pleasure that only lasted a few weeks of hard graft but you got paid and it always seemed to be sunny in the countryside. 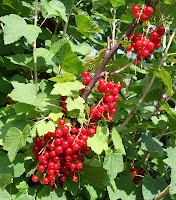 Life has moved on. Very few locals go to the berries any more, but we can grow our own fruit and modern techniques and varieties allow us to extend the season.
My earliest memories (1960), of home grown fruit was picking a few strawberries to add to my plate of cornflakes at breakfast. I felt like royalty with the health benefits from fresh fruits invigorating my mind. The journey to work from my home in St. Marys to Dawson Park was no problem on my bike, and anyway it had a three speed gear, very modern.
I have always had a deep interest in fruit culture from rasps to apples, having worked commercially on many soft and top fruit farms in southern England, and now back in Scotland my fruit growing is on a domestic scale. My research background encourages me to try new products and now that we have global warming it is worth trying out those fruits normally associated with warmer climates..
By the way, global warming is a long term statistic we are informed about, but not immediately obvious considering the last three very wet years followed by the coldest winter in living memory for many people, though in Dundee we always seemed to miss the worst.
Anyway I will give you my thoughts on the summer soft fruits I have been growing both in my garden and on my allotment today and next week.
I will discuss my top fruit trees in a later article.
I grow strawberries, raspberries, black, white and red currants, saskatoons, blaeberries, blueberries, gooseberries, brambles, goji berries, figs, outdoor grapes and cape gooseberries. I also had Aronias, the chokeberry, and lingonberries for a few years.
Saskatoon fruit in July 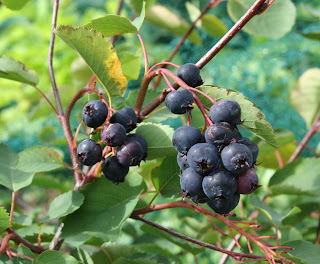 Strawberries
Strawberries can now be picked over several months by selecting the appropriate variety and growing technique.
My season starts in early to mid June with an early variety called Mae. I have two rows, one of which I cover with a low polythene tunnel at the end of winter. This harvests two weeks ahead of the unprotected row, and the polythene cover protects the ripening fruit from damp so I get a full crop as there is no botrytis to spoil any fruit.. Main season varieties start in July with Honeoye, and Elsanta, then followed by late varieties Symphony and Florence. Commercially Elsanta is the supermarkets favourite as it is a large clean berry with excellent shape and a heavy cropper. 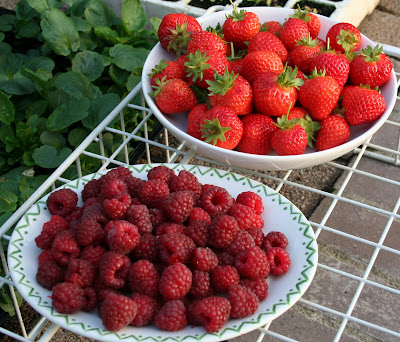 There is also a drive to put back flavours, textures and high nutritional values back into fruit to improve the health of the product. In the past there was too much emphasis on producing large fruit with a heavy cropping potential. However a lot of these varieties suffered from botrytis which rotted a lot of fruit during wet weather, so it was normal to spray chemicals at least three times just before fruiting. Today the use of chemicals is frowned upon, so newer varieties are bred with vigour that are not prone to rotting so no chemicals are needed.
The picking season extends till October, depending on sunshine levels with a perpetual variety Flamenco. I am also trying a new perpetual called Malling Opal. The perpetuals will continue well into November with a late autumn, and may look brilliant, but lack of strong sunshine gives a hard fruit devoid of flavour.
It is now possible to follow the experience of the commercial growers and buy in cold stored runners (dormant leafless crowns), at a range of times up to July and plant these outdoors or in poly tunnels or glasshouse, even using growbags, (ten to a bag). They will start cropping sixty days from planting. So with a range of different planting dates fruiting can continue for months.
I have included a photo of some fruit of strawberries and raspberries I picked on 4th October 2007.
Strawberry growing is easy, but they must be strictly managed.
I grow in rows 2.5 feet apart with plants at one foot intervals. If using my own runners and they are plentiful, I plant a double row at six inch spacing to give me a heavy crop in the first year.
I do not remove any runners during the summer, though many people do, and I control slugs before cropping and bed the rows with straw to stop soil splashing onto the fruit.
After harvest I remove the straw and cut off all foliage. The crowns grow again very quickly. In early winter I give a light dressing of garden compost between the rows which I dig in as well as any runners rooting in the middle of the rows. I only crop for three years.
Raspberries
Raspberries should be grown in every Scottish garden. They should be as common as rhubarb and just as healthy. It is our national sweet dish and very easy to grow.
The variety Glen Ample bred at the Scottish Crops Research Institute at Invergowrie is now the main summer season heavy cropping raspberry. New varieties are being developed for vigour, better flavours, and pest and disease resistance to reduce the need for chemical controls, as well as an ability to crop well under tunnels to extend the cropping season.

Look out for the new SCRI variety Glen Fyne,
a heavy cropper with very sweet berries full of flavour.
For gardeners not having tunnels the variety Autumn Bliss will fruit from early August till the frosts. It fruits on current canes, so I cut back the old canes to ground level then do a light thinning of new canes so they do not overcrowd each other. I also give them some support with six inch weldmesh wire held at three feet high which they can then grow through.
The last three wet summers have resulted in the spread of raspberry root rot disease, phytophthora which causes the leaves and new emerging canes to wilt and die off. Studies are under way to breed resistance or at least tolerance into new varieties. I am testing a variety bred at Washington University called Cascade Delight that is reputed to be tolerant to root rot. My previous row of Glen Ample died out last year with what I suspect could be phytophthora. Some types of this disease which is spread by ground water is quite specific only affecting one host, but others strains can affect a wide range of plants. Another strain of phytophthora causes potato blight a big problem recently in our wet summers, but this one spreads in the air, as well as by infected tubers.
I will cover more soft fruit next week to include the currants and gooseberries as well as the more exotic outdoor grapes, gojis, chokeberries and figs and the latest berry gaining popularity, the saskatoon.
END
Posted by John Stoa at 10:50