As the season warms up, the garden has never shown so much potential. The long hard winter appears to have reduced the amount of overwintering pests and diseases, and now plants are showing a lot of promise for good crops and plenty flowers.

The Flower Garden
Summer bedding plants have now been planted out in borders, tubs and hanging baskets.
However my winter show of pansies in hanging baskets and tubs are still very colourful, so I let them finish their show grouped together on the patio beside the new summer tubs.
I rely on geraniums, and tuberous begonias for my main display, supplemented with other summer bedding plants.
I also plant out patches of spray chrysanthemums, and gladioli with sweet peas trained up some fence lines.

Roses seem to be healthier than ever this year. There is little signs of greenfly, mildew or blackspot. The last three very wet years really allowed diseases to flourish so I removed all roses than were not strong enough to fight off fungus attacks. So out went many bush and climbing roses to be replaced by stronger and more disease resisting types. 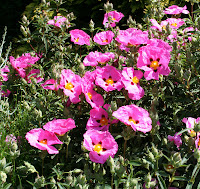 A heavy infestation of greenfly disappeared when a passing swarm of ladybirds spotted them. If only it was always that easy.
I replaced one climbing rose with a shrub rose Gertrude Jekyll then treated it as a climber. It just loves this spot on a west facing wall on the patio providing a mass of deep pink flowers with the old English rose scent wafting over the patio. Now this is summer. 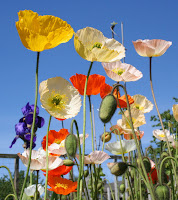 Another border is ablaze with scented flag iris and oriental poppies. My garden may be my labour of love and main hobby, but my income comes from the world of art. Flowers give me inspiration to paint and the Iris just had to go onto a canvas together with some spectacular Iceland poppies both in my garden around the studio as well as on my allotment in City Road.
These new paintings on large canvases can be seen on my website on my Art Exhibition page.
The Fruit Garden

I have been a fruit lover since childhood having been weaned on the berry fields around Dundee since about nine years old, so growing raspberries and strawberries was essential to a normal way of life, but not forgetting rhubarb, previously so common in poor working class family gardens but now almost elevated to super food status. I have always loved it raw with or without a dip in the sugar bowl, or as crumble or stewed for dessert.
A short spell during my horticultural training years at our local Scottish Crops Research Institute in the sixties introduced me to a wide variety of fruit previously unknown.
We had the museum collection of apple trees from all over the world looking for a variety suitable for eastern Scotland. I also remember harvesting the first crops of Blueberries in 1967 totally unknown in the UK but now widely grown everywhere.
However, now we have global warming, my research background encourages experiments with outdoor grapes, peaches, figs and now saskatoons.
I have started picking the first of my strawberries from an early variety called Mae grown under a low polythene tunnel. These will continue until my other varieties take over including Honeoye then the late summer variety Symphony.
I am also trying a perpetual variety called Malling Opal which I hope will fruit till the end of October in the open.
Raspberry growing was always very easy in the north east of Scotland and SCRI bred an very heavy cropping and flavoursome raspberry called Glen Ample.
Then along came a root rot fungus Phytophthora. My row of Glen Ample was wiped out. Research is now under way to find a variety that can resist or at least tolerate the diseases. Fortunately the variety Autumn Bliss has not been affected by root rot so I still get raspberries from August till October.
I have replaced my Glen Ample with Cascade Delight, a new variety bred at Washington State University reputed to be fairly tolerant of root rot disease.
Time will tell. 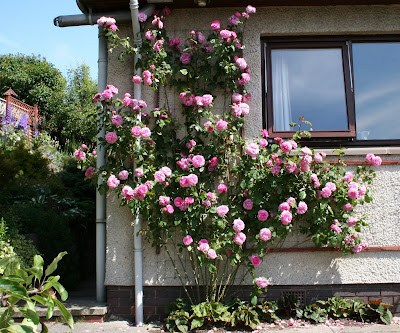 The Allotment
The allotment of today is a place to indulge in the delights of growing whatever you want, whether vegetables, fruit, flowers or just create a garden place to relax in. Sheds with patios, and seating areas are common place, but to reach the stage of being able to wind down and relax, a wee bit of work does not go amiss. Once the crops are in and all the weeds are taken care of, (a major task) the site takes on a social function.
However do not ignore the benefits of fresh air, outdoor environment, exercise and the value of fresh vegetables, fruit and flowers. 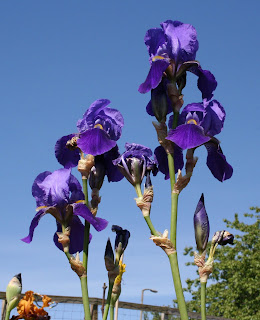 In between socialising and weeding, my first crops of lettuce, radish, rhubarb and strawberries have all received a picking. Greenfly not controlled by ladybirds infested my blackcurrants and gooseberries, so I picked off all the young infected shoots. This will also help to push plant vigour into fruiting rather than growth.
By the middle of June my allotment is virtually all planted up.
Although most vegetables are giving good growth, my parsnips have failed. Only got four plants from a whole packet of seeds. They had better be very big as they need to last from November to April.
My ornamental border full of Iceland poppies always needs dead heading before they take over the whole allotment site and I get evicted, but what a fantastic display they give.
The Cold Greenhouse
My tomato main crop Alicante and Sweet One Million cherry tomatoes growing directly in growbags continue to need removal of sideshoots as I grow them as cordons. I am now feeding them a high potash feed at every second watering.
I also grow Black Hamburg Grapes, as well as Flame, a red seedless variety which fruits in August and does not need any fruit thinning. I have planted a new white seedless type known as Perlette but it will not fruit till next year at least.
Now the garden is sorted out I had better get a brush in my hand and get back to the easel.
End
Posted by John Stoa at 15:24