CAMPERDOWN PARK
Dundee folk have always loved Camperdown Park. It has such a wide variety of interests for people of all ages for leisure, play, gardening and numerous events are held regularly.
You can play golf, tennis, go for a long woodland walk around the park and over the road into Templeton woods then onto Clatto reservoir. Young children have a huge play area with boating pond and a zoo that keeps getting bigger, and for those who love an outdoor career the Council employs gardeners, nurserymen, greenkeepers, gamekeepers and foresters to look after this huge country park.
History
A few hundred years ago it was quite fashionable for one country to expand into another through invasion. The British developed the Commonwealth countries and the French had a go with the Napoleonic wars. The Dutch and French began to amass a navy and made the British a bit uneasy that we could become invaded. However we had a very experienced navy involved in maritime activities worldwide, and to maintain control of the seas around our island.
Adam Duncan was born in the High Street in Dundee in 1731, educated at Dundee High School, (a grammar school then), and joined the navy at fifteen years old. He was involved in numerous sea battles all over the world and quickly rose up the ranks becoming first lord of the Admiralty. 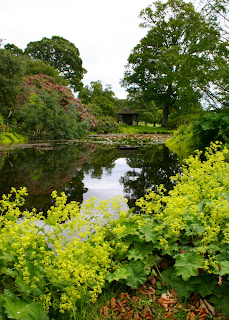 He set sail for the waters off Holland with a small fleet of 16 ships. The Dutch fleet under Admiral de Winter was amassing a continental army to invade Britain. Admiral Adam Duncan engaged their fleet just off the Dutch coast at Kamperduin on 11th October 1797. Instead of using the normal naval battle tactics of each ship taking on its opposite opponent in a battle line, he sailed straight into and through their line assisted by bad weather creating poor visibility. The Dutch fleet could no longer flee back to the safety of their harbour as Duncan’s ships blocked their passage, and blew a lot of them out of the water. The battle was won in just under three hours.
His success and bravery were recognised with an annual pension of £3000 and a title of Viscount Camperdown, with lands at Camperdown, Templeton and Clatto.
Admiral Duncan’s son Robert built Camperdown house in 1828, though it took four years to build. He also planted up the woodlands adding numerous unusual specimen trees to the collection.
Several generations of the family lived there till 1937 and after the contents were sold off in an auction in 1941 the Dundee Corporation bought the house and estate in 1946.
Facilities
The management of the Camperdown estate was put in the hands of the Parks Department who over time developed it into a place where Dundee residents can go for their leisure and recreation.
Fifty years ago the development work was going ahead at full speed and Dundee’s numerous apprentices all played a part. Massive mature trees had to be removed during the creation of the golf course fairways, some so big that the roots had to be blasted out of the ground with gelignite. Woodland trees were chopped down to create the woodland walk around the perimeter.
The zoo started off beside the big house with a few ducks and goats managed by one gamekeeper, and the land where the present zoo exists was a nursery with fields growing potatoes, cabbage and Swedes to feed the animals in the expanding zoo. The gamepeeper got quite alarmed when he heard there was talk of acquiring a bear and a couple of lions. The perimeter six foot chain link fence might not be strong enough to keep them in and they might not be too happy with a diet of Swedes and winter cabbage.
The walled in nursery lost its growing fields and a new zoo was built complete with bear but without those lions. The zoo has now been revamped again with modern facilities.
The golf course has always been popular with fantastic views over the Tay between drifts of mature woodland, and Children’s leisure has been addressed with a huge award winning play area, and boating pond.
Woodland walks now take in Templeton woods and Clatto reservoir. There is an excellent mature pinetum to the west of the mansion and to the east there are many mature specimens of exotic trees including cedars, giant redwoods, sweet chestnut, weeping ash and now the original specimen of the weeping Camperdown elm is protected with its own enclosure.
Nurseries 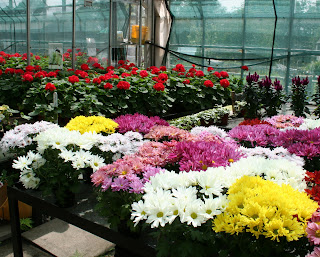 Dundee Parks dept grows its own trees, shrubs, roses, bedding plants and flowering plants for civic decoration at the glasshouses and nursery in Camperdown Park. This is an excellent training ground for young gardeners keen to learn propagation and how to grow and use garden plants.
Events
The public have really taken to Camperdown Park. It is absolutely mobbed at Easter and during the annual Flower and Food Festival the first week in September, (this year it is from Friday 2nd September to Sunday 4th September).
Other events from car rallies, pipe bands to half marathons are held throughout the year.
End
Posted by John Stoa at 23:19