Summer in the Garden

SUMMER IN THE GARDEN
There is always an opportunity to do a bit of gardening in between thunder storms. The weather continues to keep us on our toes. We got the expected three days really hot weather at the beginning of July, (the Scottish summer), but let’s hope there is still a few more warm days left.
The extreme weather has caught out a lot of crops, but others have responded very positively. I have a very heavy crop of apples, blackcurrants, saskatoons and strawberries, but precious little plums and pears which were shredded by the gales. My figs are down to about a dozen, (last year I had over forty), and every time I check on my peach tree there are further fruit losses. Last week we were down to the last two peaches, one for each of us, then, on checking after the thunderstorms, I noticed that Anna’s had fallen off!!!
However we have no problem with drought, and now there is a bit of warmth in the sun, a lot of plants are beginning to put on a bit more growth.
Checking last year’s diary, we seem to be running at least one week earlier this year, especially for soft fruit. Gardens in England are a lot further ahead as they have had some very hot weather, though not a lot of rain. Those that can irrigate their crops have a huge advantage. 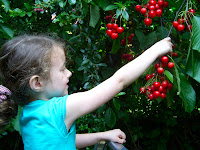 Flowers
The Delphiniums are stealing the show this month. The spikes are very big and the colours strong, but there was a fair bit of damage after the July thunderstorm. I bought a packet of seed about fifteen years ago from Blackmore and Langdon who specialize in Delphiniums and got about thirty plants. I still have six of the best left producing intense blue spikes every year. 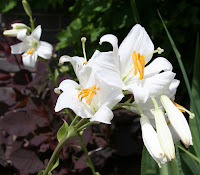 My lilies are now coming into flower with Lilium candidum, the Madonna lily, coming into bloom first. I like this variety as the scented flower heads are held upright.
Annual Shirley poppies have started flowering, though the Californian poppy has been out for weeks and the Iceland poppies which flower in spring continue to bloom.
Fruit
Late strawberries Florence and Symphony are at their best in mid to late July and my perpetual variety Malling Opal has a terrific flavour, but it is not producing any runners to keep the stock going. Black and red currants and saskatoons are a week ahead of last year with huge crops. There is too much to eat, freeze, make jam and compote, so I have started to use them for wine making. I look forward to trying out my Saskatoon wine.
I have also started a batch of Aronia (Chokeberry) wine. Interesting times lie ahead. 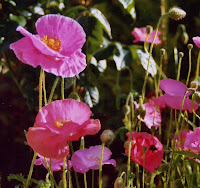 Saskatoon netting is now in place to protect the crop from birds, much to the severe annoyance of my local blackbird, who really gave me a piece of his mind, but soon realized that no amount of charging at the net would work. I’ll leave him the late berries after I pick the crop as there is plenty for all of us. My cherry tree is now recovering from the blackfly infestation, so I hope it will push out some fresh young shoots.
Outdoor grape Brant has recovered from the gales and is putting out shoots ten foot long. There is an excellent crop of young grapes, but to encourage the plant to put its energy into the fruit, the long shoots need removing by cutting back to two leaves after every bunch.
Vegetables
Planting has continued with cauliflower and leeks getting transplanted, as well as pumpkins and courgettes now that all frost risk has gone. The latter two crops got a lot of garden compost added to the soil to increase fertility and retain moisture.
A row of early salads under low polythene tunnels have now all been used, so the space has been used for a late sowing of carrots, hoping that they will miss the attention of the carrot fly.
Harvesting continues with early cauliflower, lettuce, radish, spring onions, baby beetroot, swiss chard and golden ball turnips.
Brassicas have not had a good start this year. They were all netted against pigeons, but caterpillars have been a constant nuisance, and clubroot has been a major problem in strong summer sunshine as there was not enough roots left to take in moisture. Rotation is the only solution, as chemicals are no longer available, but as I grow wallflower and radish and sow green manures with mustard, it is hard to keep a strict rotation. Clubroot spores can remain in the soil for up to twelve years.
House plants 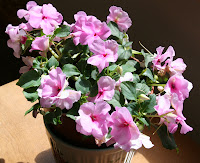 Spare Busy Lizzies left over from the summer bedding make excellent house plants but need good compost and regular watering and feeding. Another short lived, but good house plant is our cactus, Chamaecereus sylvestrii. It gets ignored for most of the year, but as long as it gets left in a sunny window sill, with a wee bit of watering every second month or so it will cover itself in flowers in early summer. At that time give it a bit more water and a wee feed.
End
Posted by John Stoa at 10:10