FOCUS ON SOFT FRUIT
The soils and climate around Tayside and Angus are perfect for growing a wide range of soft fruit.
We have specialised in raspberry and strawberry growing for local and national markets for generations and now blackcurrants, brambles and blueberries are grown on a large scale.
The James Hutton Institute, previously known as the Scottish Crops Research Institute has been studying soft fruit for a long time. Initially the emphasis was on commercial growing methods, pest and disease control and breeding new varieties suited to our location. Research now continues on a global scale and includes potatoes, and cereals and research into improving the health benefits of edible plants, integrated pest and disease management rather than total control with chemicals as in the past, and working with the environment especially with weather pattern changes brought on by global warming. Scientists from all over the world come to Dundee to carry out research. 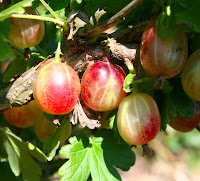 Research will always require a commercial application to attract funding, so new varieties and growing techniques are aimed at growers and farmers, but there is usually a spin off for the amateur gardener who likes to keep up to date. Unfortunately, however for the amateur gardener, most of the new varieties of soft fruit are bred to be successful under polythene tunnels as this type of production is demanded of the growers from their main clients, the supermarkets. Be aware of this when trying out new varieties that you wish to grow in the open without protection, as they may be a bit prone to botrytis, especially if we are in for a spell of wet summers.
The Scottish diet gets a fairly bad press, but we now have knowledge of all the best foods we should be eating, and as healthy living becomes more fashionable and demand for allotment grows maybe in time we can reverse this reputation.
Modern soft fruit is now being bred for flavour, scent, and increased antioxidant values as well as resistance to the major pests and diseases.
New blackcurrant varieties are being bred for a high vitamin C content.
Now I wonder if it is possible to retain these healthy attributes in a blackcurrant fruit wine.
That way I can still enjoy a wee tipple in the knowledge that it really is doing me good.
Strawberries
Elsanta is still hard to beat for a mid season strawberry, but Honeoye is earlier. Mae is even earlier still and if you put a low polythene tunnel over them in mid March you will gain another fortnight.
I continue with the late varieties of Symphony and Florence. The fruit is large, firm with a great flavour, but Florence can be a bit too dark in colour.
Raspberries
Glen Ample is one of the best main crop varieties, but can suffer from phytophthora root rot which is now becoming a real menace. Autumn Bliss will fruit from mid summer till the frosts. It has large fruit of an excellent flavour and is resistant to root rots. Work is continuing at James Hutton Institute to breed new raspberry varieties with sufficient vigour to resist phytophthora root rots.
Blackcurrants and Gooseberries

Ben Conan is my favourite, though Ben Lomond is very popular. Both have large fruit with excellent flavour, produce heavy yields and are very high in vitamin C.
Ben Conan does not grow too tall, so is very suited to gardens and allotments with limited space.
Big Ben is said to have huge berries, but I have not tried it yet.
Research work continues at Invergowrie into producing a red and a yellow gooseberry with resistance to mildew and also with thornless stems to ease picking.
Blackberries
Helen is very early bramble. The fruit a great flavour with very small seeds so is suitable for jam as well as eating fresh. I tried Loch Ness but found it suffered a lot of botrytis in our wet summers, though commercially under tunnels it is one of the best.
Blueberries
Bluecrop is very popular with large fruit, but they will still need netting from birds and will only grow in an acid soil.
Saskatoons and Chokeberries

Both still at the novelty stage, but very easy to grow with heavy crops of black fruits very high in anti-oxidants. Aronia Viking is the most popular variety of Chokeberry.
Saskatoons crop in July and can be eaten fresh, added to yoghurts, baked for pies, scones, oaties, sauces, jam and compot and makes a delicious wine if there is any spare.
Chokeberry is used in a similar way except that it is a wee bit too astringent for eating fresh, but its high vitamin C content makes it a must have for the health conscious gardeners.
End
Posted by John Stoa at 23:05